Manchester United vs Bournemouth, Premier League 2019–20: Mason Greenwood, Paul Pogba and Other Players to Watch Out in MUN vs BOU Football Match 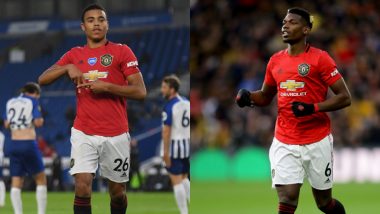 Manchester United will eye a third consecutive league win when they host a relegation-threatened Bournemouth in Premier League 2019-20 on Saturday. United are unbeaten in their last 15 games and can for the first time this season break into the top four with a win against Eddie Howe’s struggling side. United are just two points behind the fourth-placed Chelsea, who lost 2-3 to West Ham, in the points table and can also go level on points with Leicester City at third with another home win. Bournemouth, in contrast, are placed second from the bottom are winless in their last seven. Manchester United vs Bournemouth, Premier League 2019-20 Free Live Streaming Online.

Ole Gunnar Solskjaer hinted at resting some of his key players after going almost with the same XI in the opening three league matches since the season resumption. United thrashed Brighton 3-0 in their last league fixture and beat Sheffield United by the same margin in their last home game, where they have not conceded a goal in their last five. Manchester United vs Bournemouth Dream11 Prediction in Premier League 2019–20.

Bournemouth’s last win came on February 1 against Aston Villa, who are a rank above them in the standings. They also held Chelsea to 2-2 draw at home but have lost four straight games since then. An unlikely win against United, whom they beat 1-0 in the reverse league fixture, will take Bournemouth one place and two points clear off the relegation zone. Take a look at some key players, who can impact the result of Manchester United vs Bournemouth match.

The Frenchman recorded history with a hat-trick against Sheffield United in United’s last home fixture. But he was silent in the 3-0 win over Brighton midweek. Martial has a history of going quiet for a game and bursting back into the limelight in the next and if one is to go by that prediction, Bournemouth could be in for a long evening at Old Trafford.

Martial became the first United player to register a hat-trick since Robin van Persie in 2013 when he netted a treble against Sheffield. Back at home, he will certainly be eager to add more to the scoring charts.

The Norwegian was a target for Manchester United in the winter transfer window after scoring the winning goal in Bournemouth’s 1-0 win over the Red Devils in the reverse league fixture back in November. King, however, remained at Vitality after being refused a transfer by the club.

United too were not very keen owing the forward’s injury history. His first-half goal was enough for Bournemouth to seal an unlikely win over united in the previous meeting and with Callum Wilson suspended for this game, King might once again start if he is passed fit from an ankle injury.

Pogba has been a different player ever since returning from injury post a coronavirus induced three-month halt. He was almost ruled out from the season with a knee issue since October last year. But the Frenchman has returned as a player with more desire and spirit. His partnership with Bruno Fernandes has been key to United’s season, which resumed last month.

Pogba won the penalty that helped United draw at Tottenham, played the key pass that led to Harry Maguire’s winning goal against Norwich in the FA Cup and also assisted Fernandes for the first of his double against Brighton.

But with Fernandes likely to be given a rest, Pogba could assume the No 10 role, usually played by the Portuguese, when Bournemouth visit Old Trafford. Despite his brilliance, he is yet to find the net and the attacking midfielder position could just be the key to him finding his scoring boot once again.

He made his second successive league start against Brighton and answered the manager’s trust with a wonderful goal and an assist. His goal after just 16 minutes lightened United’s pressure and paved the way for a comfortable win. Greenwood also went on to assist Fernandes with a brilliant pass to complete a counter-attacking move.

The 18-year-old might have to settle for the bench as the manager hinted at rotating players due to a tight schedule but he will certainly come on as a substitute and then will hope to add to his 13 strikes this season.

(The above story first appeared on LatestLY on Jul 04, 2020 05:27 PM IST. For more news and updates on politics, world, sports, entertainment and lifestyle, log on to our website latestly.com).