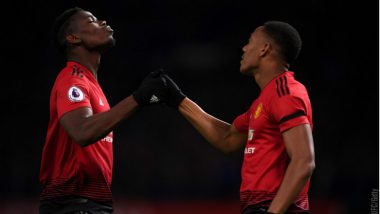 Manchester, October 29:  Manchester United bounced back with a 2-1 victory over visiting Everton in the English Premier League, five days after its 1-0 home defeat at the hands of Juventus in the UEFA Champions League group stage. Goals from France midfielder Paul Pogba and forward Anthony Martial on Sunday allowed Man United to climb up the English league standings to eighth place with 17 points, just two points ahead of ninth-placed Everton, reports Efe.

It started when Senegalese midfielder Idrissa Gueye fouled Martial inside the box and a penalty kick was called. Pogba took the shot, which Everton keeper Jordan Pickford blocked, but the ball ricocheted back to the Frenchman who put it home and got his side on the scoreboard in the 27th minute. Jose Mourinho Clarifies on His Manchester United Future; Expects Contract Extension.

The referee then denied a second goal for United as he ruled England forward Marcus Rashford was offside, and the Red Devils ended the half with a 1-0 lead. Martial extended the lead in the 49th minute on an outstanding far-range shot that went past Pickford, securing United's fifth league win this season.

Check the Video Highlights of the Match Here

The Red Devils suffered for the rest of the second half, and their defender Chris Smalling fouled the Brazilian striker Richarlison inside the area that resulted in a penalty kick for Everton. Iceland midfielder Gylfi Sigurdsson managed to pull one back as he successfully converted in the 77th minute, but it was not enough to prevent his side's third Premier League defeat.

(The above story first appeared on LatestLY on Oct 29, 2018 02:49 PM IST. For more news and updates on politics, world, sports, entertainment and lifestyle, log on to our website latestly.com).