Paulo Dybala Joins Juventus After an Injury, Sweats it Out With Cristiano Ronaldo & Team Ahead of Serie A 2020-21 Game Against Roma (See Pics) 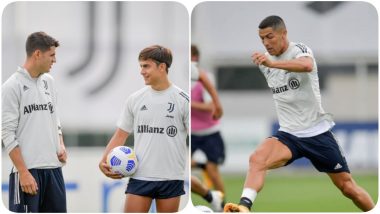 Paulo Dybala has joined Juventus after being absent from the game against Sampdoria. He was seen sweating it out with Cristiano Ronaldo and other ahead of their game against Roma. It would be interesting to see how Andrea Pirlo will set up the team with Cristiano Ronaldo, Dejan Kulusevski and Dybala. The Bianconeri shared the pictures of the team sweating it out. Ronaldo also took to social media to share a few pictures of the same on social media. Roma is all set to host Juventus on September 28, 2020, at the Stadio Olimpico. Juventus Forgets to Put Training Pictures of Paulo Dybala, Argentine Reminds Bianconeri With a Tweet.

Paulo Dybala has been away from action from the Round of 16 in the Champions League 2019-20 when Juventus played against Lyon. Back then, the team thoroughly missed on out on the services of the Argentine as Cristiano Ronaldo scored a couple of goals and still failed to advance to the round of eight as they lost on away goals. Now, let's have a look at the pictures shared by Juventus and Ronaldo.

Juventus had won their first game in the Serie A 2020-21 3-0. Whereas the hosts, enter the game with a loss. The team had lost 3-0 against Verona this they would be looking forward to getting back to winning ways.

(The above story first appeared on LatestLY on Sep 25, 2020 06:22 PM IST. For more news and updates on politics, world, sports, entertainment and lifestyle, log on to our website latestly.com).