Marcus Rashford, Anthony Martial and several other Manchester United players were subject to racial abuse on social media following a defeat to Sheffield United and the goalless draw against Arsenal in their last two matches. Police confirmed they have been altered to footballers being racially abused and are investigating the matter. 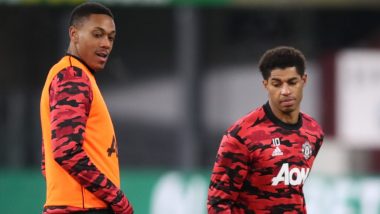 Manchester police are investigating racist comments made to several Manchester United players, including Marcus Rashford and Anthony Martial, over social media after disappointing results in the club’s last two matches. Police were alerted after several Manchester United players revealed they were racially abused on social media in the past week following a 1-2 defeat against Sheffield United and a goalless draw at Arsenal. Rashford, Martial and Axel Tuanzebe were among those targeted on social media. Marcus Rashford Attacked Racially on Social Media After Goalless Draw Against Arsenal in EPL 2020-21, Manchester United Forward Says, ‘Humanity at Its Worst’.

The club, English FA and their teammates condemned the abuse and called for social media companies to intervene and prevent the posting of hateful messages on social media. The Greater Manchester police said they have been made aware of the hateful messages sent to these players and are investigating these crimes thoroughly.

“We are aware of a number of Manchester United football players suffering abuse on social media accounts between Wednesday and Saturday,” said a statement from Greater Manchester Police. “Nobody should be subject to such abuse and it is deeply upsetting not only to those who suffer it but to all those who come across this awful language too.

“These hateful words have no place anywhere in our society whether online or otherwise. A number of these comments have been reported to us and we are liaising with those involved to provide support and we will be investigating these crimes thoroughly,” the statement added.

Humanity and social media at its worst. Yes I’m a black man and I live every day proud that I am. No one, or no one comment, is going to make me feel any different. So sorry if you were looking for a strong reaction, you’re just simply not going to get it here 👊🏾

Rashford was the latest United footballer to receive racist comments online after he had a poor game against Arsenal. “I have beautiful children of all colours following me and they don’t need to read it,” the 22-year-old said in a series of tweets. “Yes I’m a black man and I live every day proud that I am. No one, or no one comment, is going to make me feel any different. So sorry if you were looking for a strong reaction, you’re just simply not going to get it here.”

(The above story first appeared on LatestLY on Jan 31, 2021 08:22 PM IST. For more news and updates on politics, world, sports, entertainment and lifestyle, log on to our website latestly.com).