Portugal Squad for 2018 FIFA World Cup in Russia: Lineup, Team Details, Road to Qualification & Players to Watch Out for in Football WC

Portugal placed in Group B of FIFA World Cup 2018 and will begin their tournament campaign against formidable units of Spain on June 15. 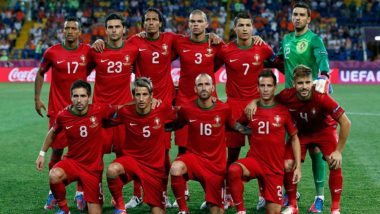 A new look Portugal squad heads to the FIFA World Cup in 2018 with ten stars of the 2016 European Championship winning campaign find themselves surplus to requirement. Head coach Fernando Santos has expressed his sadness in flushing out some of the reigning European champions from making the cut in Russia but has said the decision is best in the interest of his nation. Several high-profile names like Nani, Andre Gomes and Renato Sanches have been left behind. But saddest story of the lot surely is of striker Eder whose goal won Portugal the final against France. Coach Fernando Santos announced a 23-man squad, and it is time we take a detailed look at Portugal probable playing team lineup, squad news for the 2018 FIFA World Cup in Russia. FIFA World Cup 2018 Schedule in IST for PDF Download: Fixtures, Groups, Time Table with Match Timings & Venue Details of Football WC in Russia.

The midfield consists of some of the names who have had regular football under their belt in the English Premier League like Adrien Silva, Joao Mario and Bernardo Silva. The central defense will consist of Bruno Alves and Jose Fonte, with the duo somehow making it to the 23-man list. The ageing Alves and Jose Fonte who now plays in the Chinese Super League had many doubters at the turn of the year but can now focus at the task on hand. 2018 FIFA World Cup Friendlies Fixtures: Check Full Warm-Up Schedule Timetable in Indian Time for Germany, Brazil, Spain, England, Argentina and All 32 Countries.

The forward line sees skipper Cristiano Ronaldo who had has a mixed bag season considering his out of the world level, will look to bow out on a high in what should be his last World Cup with the national team although nothing can be said of the former Manchester United wide man considering his physical ability. Andre Silva of AC Milan and Ricardo Quaresma are some of the exciting attacking talents that Portugal has in its ranks, and their attack looks a very potent one.

Portugal dominated Group B of the European World Cup qualifiers with nine wins and a loss out of the ten matches they played to finish with 27 points. Finishing top of the group enabled them to qualify for the World Cup in Russia via the automatic route. Cristiano Ronaldo scored 15 goals for Portugal in the qualifying phase and finished just a goal behind the highest European scorer Robert Lewandowski.

Portugal had a poor World Cup in Brazil as they were run over by Germany in the opening match by a margin of four goals. They held on to a 2-2 draw against the USA and defeated Ghana 2-1 to finish level on points with the USA with 4. But a negative goal difference saw Portugal bowing out at the group stage, a disaster for a team considered as dark horses before the start of the tournament.

Cristiano Ronaldo: One of the greatest footballers to ever grace the game of football, Cristiano Ronaldo is synonymous with winning, flair, skills, goals and a lot more. He will be representing his nation in his fourth World Cup, and although he has not lit up the tournament since the 2006 edition in Germany, the legendary footballer can weave his magic in Russia.

Bernardo Silva: He helped Manchester City win the title scoring crucial goals from out wide and is in his prime at the moment. He will be a regular starter for Portugal in Russia and can ease the burden of Cristiano Ronaldo in the scoring department.

Portugal placed in Group B of FIFA World Cup 2018 and will begin their tournament campaign against formidable units of Spain on June 15. They will be next playing Morocco on June 20 and Iran on June 25. Before the World Cup, they will also be playing few friendly games. First warm up match is against Tunisia on May 29 at Estádio Municipal de Braga, Portugal; secondly face Belgium on June 3 at Heysel Stadium, Belgium. On June 8, Portugal vs Alegria at Estádio da Luz in Lisbon, Portugal will be played.

(The above story first appeared on LatestLY on May 28, 2018 04:56 PM IST. For more news and updates on politics, world, sports, entertainment and lifestyle, log on to our website latestly.com).