There are more than 50 warm-up games played before 32 teams land in Russia to kick-off the finals at FIFA World Cup 2018. 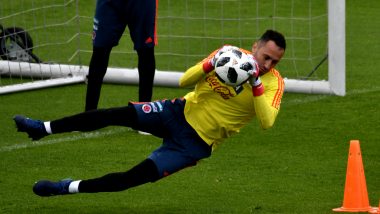 The FIFA World Cup 2018 in Russia is just around the corner, and the international friendlies provide the ideal platform for the coaches to test their squad and fine-tune the performances. These matches give the ideal platform for squad rotation, finalize team lineup and the fringe players have the opportunity to stake a claim in the starting eleven in Russia. While the schedule timetable of FIFA World Cup 2018 has been out for some time now, the keen football lovers are ready to follow their favourite teams participate in friendlies. The full list of 2018 FIFA World Cup friendlies fixtures is out, and it has complete information on all 32 teams playing their warm-up games in Indian time as the country boasts of crazy football fan-following. So, get ready to catch all the live action of friendly matches played by Germany, Brazil, Spain, England, Argentina to Saudi Arabia and Nigeria. You can also download the FIFA World Cup 2018 Warm up schedule timetable in PDF or JPEG format. FIFA World Cup 2018 Schedule in IST for PDF Download: Fixtures, Groups, Time Table with Match Timings & Venue Details of Football WC in Russia.

FIFA World Cup 2018 is scheduled to kick off on June 14 and last until July 15. The biggest footballing event will see as many as 32 nations with a total number of 64 matches played. But before the main action unfolds in Russia, the teams will be participating in a string of friendly games to test their bench strength, find perfect combination and zero down on the final team lineup. Friendlies are also a great way to test for lower ranked teams, playing against stronger opposition in the friendlies does boost their morale and is crucial for their campaign. The main challenge also remains with keeping the squad fit and losing players which would be disastrous for the teams. 2018 FIFA World Cup Team Slogans: Check Out Team-Wise One-Liners of Participating 32 Nations in WC 2018 Russia.

France vs Republic of Ireland

Brazil coach Tite and his men face fellow World Cup participant Croatia in Liverpool, and later they travel to Vienna to play Austria. Philip Coutinho will start for Brazil in his former team’s stadium and will know a thing or two about how to score scorchers in Anfield. Defending champions Germany have faltered off late in the friendlies and are up against Austria and Saudi Arabia in their home turfs in Klagenfurt and Leverkusen. They would have ideally preferred tougher opposition but never the less can built fitness over the course of the friendlies.

England and France know all about blowing up their campaigns in the past few tournaments and have decided to play their friendlies on home turf. While England plays Nigeria and their 2014 World Cup nemesis Costa Rica, France has to deal with Republic of Ireland, Italy and the USA to get to know more about the status of their preparation. Both the sides have to work on their defensive stability and may try out new combinations at the back.

2010 World Cup winner Spain have found new resurgence under head coach Julen Lopetegui and are a force to reckon with going into Russia. They play Switzerland and Tunisia who are both World Cup-bound in friendlies before flying with the squad to Russia. Australian FA has scheduled its matches in Europe to get accustomed with the climate as they face Hungary and the Czech Republic who although have missed out qualification, play good attacking football.

Belgian football is going through its golden period, and the squad has qualities in every department, and Roberto Martinez can decide on his combinations when it plays Portugal, Egypt and Costa Rica who are all tough nuts to crack. One of the strong contenders for the title Argentina have friendlies lined up against minnows Haiti and Israel with the opportunity to get back to winning ways after disastrous results in last round of friendlies. Mexico has an all European opponents in Denmark, Scotland and Wales who will offer stiff resistance and is a good thing in Mexican preparation for World Cup.

There are more than 50 warm-up games played before 32 teams land in Russia to kick-off the finals at FIFA World Cup 2018. The first game of the tournament is between host nation, Russia against Saudi Arabia on 14th June 2018 Luzhniki Stadium, Moscow. These participating countries are divided into eight groups and will play 48 group-stage matches before heading off to the knockout stage.

(The above story first appeared on LatestLY on May 25, 2018 02:17 PM IST. For more news and updates on politics, world, sports, entertainment and lifestyle, log on to our website latestly.com).