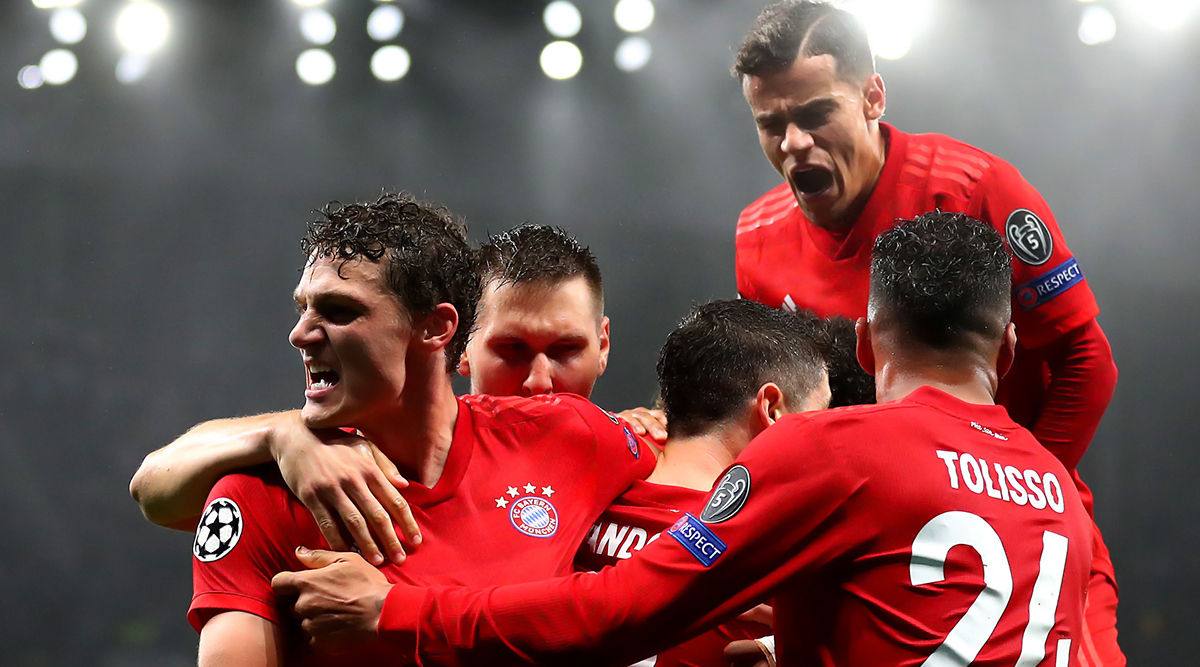 Berlin, December 12: Bayern Munich completed the UEFA Champions League group stage with a perfect record, beating Tottenham Hotspur 3-1 to clinch their sixth win in as many games and finish at the top of Group B. Goals from Kingsley Coman, Thomas Muller and Philippe Coutinho were enough to see off Spurs, for whom Ryan Sessegnon scored what turned out to be a consolation goal on Wednesday evening, reports Xinhua news agency. Even though both sides had already qualified for the knockout stage before kick-off, Bayern looked to seize control from the start, but it was Spurs who had the first chance of the game as Sessegnon tested Bayern goalkeeper Manuel Neuer in the third minute. UEFA Champions League 2019–20 Result: Gabriel Jesus Hat-Trick Helps Manchester City Thrash Dinamo Zagreb 4–1.

It was a wake-up call for the hosts, as efforts from Benjamin Pavard and Thiago Alcantara forced Tottenham keeper Paulo Gazzaniga into action twice, before Serge Gnabry squared to Coman, who made no mistake to slot home from close range in the 14th minute. Six minutes later, Tottenham restored parity against the run of play as the lively Sessegnon had time and space to rifle home from inside the box. Shortly afterwards, Coman suffered an injury and was replaced by Thomas Muller, but Bayern remained on the front foot. UEFA Champions League 2019–20 Result: Jadon Sancho, Marco Reus Goals Help Dortmund Beat Slavia Praha 2–1 and Secure Last 16 Berth.

It was Muller who put Bayern back into the lead just before the break, slotting home a rebound which ricocheted off the left-hand post from close range to make it 2-1. After the restart, Bayern continued to control proceedings but had to wait until the 65th minute before Coutinho curled the ball into the top right corner to seal the points. With the result, Bayern Munich top Group B with 18 points followed by Spurs (10 points), Olympiacos (4 points) and Red Star Belgrade (3 points).

Elsewhere in Germany, Bayer Leverkusen will drop into the Europa League in the new year 2020 after finishing third in Group D following a 0-2 defeat to group leaders Juventus, who sealed their win thanks to second-half goals from Cristiano Ronaldo and Gonzalo Higuain.