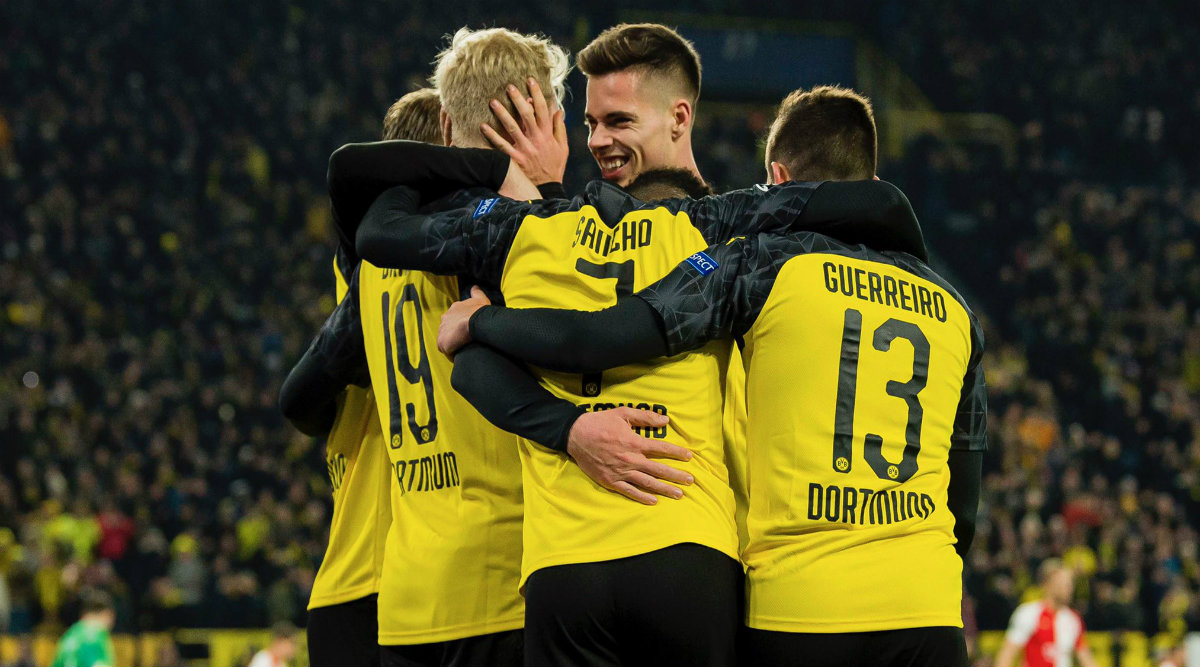 Dortmund, December 11: Borussia Dortmund made it to the knockout rounds of the Champions League on Tuesday after squeezing past Slavia Prague 2-1 to beat Inter Milan to second spot in Group F and a place in the last 16.

Goals in either half from Jadon Sancho and Julian Brandt were enough for the German side to finish three points ahead of third-placed Inter, who go into the Europa League after losing 2-1 to group winners Barcelona. UEFA Champions League 2019-20 Result: Mohamed Salah, Naby Keita Score as Liverpool Beat Salzburg 2-0 to Reach Last 16.

"(It's) a mixture of everything: relief, tiredness, joy. They played really well, pressed us aggressively and high and had several chances," Brandt told UEFA.com.

Dortmund had goalkeeper Roman Burki to thank for the win after the Swiss stopper pulled off a host of saves to ensure the three points on a nervy night at Signal Iduna Park, which also saw Dortmund having to play the final 12 minutes with 10 men when Julian Weigl was sent off for a second bookable offence.

With Dortmund having to match Inter's result with Barca to go through it wasn't until Ansu Fati put the Catalans in front with four minutes to go at the San Siro that the German outfit could breathe easily as bottom side Slavia took the game to their more illustrious hosts.

"I am proud of our performance," said Tomas Soucek, who equalised for the away side two minutes before the break.

"We played for our pride, we gave everything. (Dortmund defender) Lukasz Piszczek praised our performance after the game, saying he has never seen a Czech team playing so well."

Burki made another two terrific stops after his side took the lead, first getting his fingertips to Nicolae Stanciu's fizzing shot in he 21st minute before somehow pushing Lukas Masopust's deflected shot over the bar 13 minutes later.

Meanwhile Marco Reus missed two almost identical one-on-one opportunities within eight minutes just as Slavia looked like falling apart, but the lead remained at one goal allowing Soucek to level with a magnificent team goal as the half drew to a close.

The away side played the ball out from goalkeeper Ondrej Kolar, eventually finding Masopust on the right.

The Czech picked out Milan Skoda in the area with a perfect cross and he fed Soucek, who couldn't miss from close range.

The hosts came out on the front foot after the break, and Brandt almost had his side back in front six minutes after the restart when his shot skimmed the crossbar.

However he hit the target just after the hour mark when he collected Sancho's pass and fired home a powerful shot at Kolar's near past.

Burki made another three sensational saves to somehow keep out Slavia, as home fans nervily eyed events on the pitch and at the San Siro and Weigl was sent off after a silly foul on Soucek.

Ondrej Kudela then somehow missed a header from inches out before Olayinka fizzed a free-kick just wide as Dortmund crept over the line and into the next round.