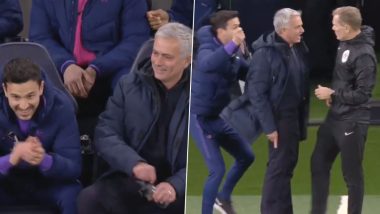 It is never a dull moment with Jose Mourinho and the Tottenham Hotspur clash against Manchester City in the Premier League was one example of that. The newly appointed Spurs manager’s reaction after Hugo Lloris’ penalty save from Ilkay Gungogan was one of the highlights in the weekend’s clash, which itself didn’t lack any entertainment. The London side got the better of the defending champions 2-0 courtesy of goals from new signing Steven Bergwin and Heung-min Son. This was Jose Mourinho’s sixth win over Pep Guardiola, only Jurgen Klopp (8) had outdone the Catalan on more occasions. Tottenham Hotspur Vs Manchester City - Live Football Score.

Jose Mourinho had a quick transformation of emotions when he came to know that Raheem Sterling has escaped a second yellow card during a penalty incident in the first half. Ilkay Gundogan’s spot-kick was saved by Hogo Lloris and Raheem Sterling tried to get the rebound in his stride but went down inside the penalty box. After consultation with VAR, referee Mike Dean decided that it was not a penalty and the Englishman was lucky to avoid a second booking for simulation. The Spurs boss was initially happy that there was no penalty awarded but after his assistant pointed out the Manchester City forward should have been sent off for diving, his mood changed in a millisecond as he angrily rushed towards the fourth official asking for an explanation.

From big smiles to complete rage 😃😡

Jose Mourinho's reaction to Hugo Lloris saving Ilkay Gundogan's penalty and then realising that Raheem Sterling could potentially be given a second yellow card shows the full spectrum of the managerial emotional rollercoaster ⚽️#PL #TOTMCI pic.twitter.com/vL6iRAXs07

It was one of the typical Jose Mourinho matches where his side were dominated but managed to get all the three points. Manchester City had 18 shots on the goal but couldn’t find the net but Tottenham, on the other hand, scored two goals with just three shots in the entire game.

(The above story first appeared on LatestLY on Feb 03, 2020 06:21 PM IST. For more news and updates on politics, world, sports, entertainment and lifestyle, log on to our website latestly.com).