Chelsea would aim to consolidate their spot at the top of the table with a win against West Ham, who are yet to win a Premier League match since their victory over Liverpool in November. The big news for Chelsea is the return of Romelu Lukau, Kai Havertz and Mason Mount with the trio set to start. 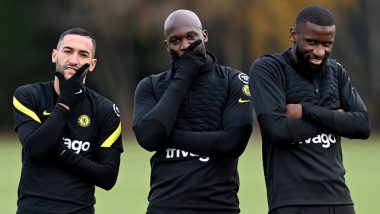 Forth placed West Ham United host league leaders Chelsea in a pulsating London derby, hoping to end a three-game winless streak. The Hammers have their eyes firmly set on qualifying for the Champions League this season and Arsenal and Manchester United appear to be the direct rivals for the hosts. Any further slip-ups could dent their bid to play in Europe’s elite competition. Opponents Chelsea have not been at their clinical best recently in domestic football, with draws against Manchester United and Burnely and an unconvincing win over Watford. This has allowed Manchester City and Liverpool to close in and set up an interesting title race. West Ham United versus Chelsea will be telecasted on the Star Sports network and streamed on Hotstar from 6:00 PM IST. Jadon Sancho & Other Members of Manchester United Pull off Cristiano Ronaldo’s SIUUU Celebration After CR7’s Goal Against Arsenal, EPL 2021-22 Match (Watch Video)

Angelo Ogbonna is a long-term absentee for West Ham United due to a knee injury but Aaron Cresswell could start despite suffering from a back problem recently. Michail Antonio is the first-choice striker the Hammers have and his hold-up play would be crucial against Chelsea. Declan Rice has long been linked with a move to Chelsea and his performance in midfield might well determine the outcome of the contest.

The big news for Chelsea is the return of Romelu Lukau, Kai Havertz and Mason Mount with the trio set to start. N’Golo Kante and Mateo Kovacic are still unavailable which means Ruben Loftus-Cheek should keep his place in midfield alongside Jorginho. Trevoh Chabolah has sustained a hamstring injury and he will be replaced by Andreas Christensen in the back three for Chelsea. Marcos Alonso and Recce James as wing-backs are crucial to the Blues’ attacking play and Hammers need to close them down quickly. Cristiano Ronaldo Congratulates Fans and Gears Up for the Next Match After Manchester United Secured Victory Against Arsenal in EPL 2021–22

The West Ham vs Chelsea Premier League 2021-22 match will be played at the London Stadium in London. The game will be held on December 04, 2021 (Saturday) and is scheduled to begin at 06:00 pm IST (Indian Standard Time).

Where to Get Live Telecast of West Ham vs Chelsea, Premier League 2021-22 Football Match?

How to Get Free Live Streaming of West Ham vs Chelsea, Premier League 2021-22 Football Match?

The game will also be available online for live streaming. As Star Network is the official broadcaster for Premier League in India, fans can watch the live streaming of the West Ham vs Chelsea match on Disney+Hotstar.

West Ham United’s brilliant run of form is now past them and Chelsea might churn out a positive result against them.

(The above story first appeared on LatestLY on Dec 04, 2021 04:30 PM IST. For more news and updates on politics, world, sports, entertainment and lifestyle, log on to our website latestly.com).