India will face New Zealand in the Crossover match at the 2023 Men's Hockey World Cup on Sunday, January 22. The IND vs NZ match will start at 7:00 pm IST (Indian Standard Time) at Kalinga Stadium, Bhubaneswar. 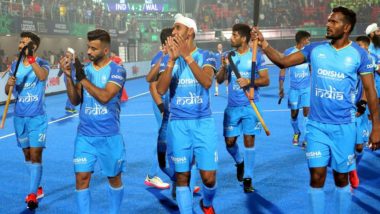 A disappointing result against Wales despite a win sees India take on New Zealand in a crossover game for qualifying to the next stage of the FIH Hockey World Cup. The home side have struggled in front of the goal for most of the campaign so far and this is a cause of grave concern. Against England, the strategy was not to opt for risks but the last match versus Wales the team needed an eight goal winning margin to make it directly to the quarter-finals and still the attack looked very limited in its capabilities. New Zealand will start as the underdogs considering the support of the home fans will benefit India but they are a dangerous team and just lack a bit of consistency. India vs New Zealand, Hockey World Cup 2023: Coach Reid Graham Backs Skillful Rajkumar Pal To Perform Well in Hardik Singh’s Absence.

Hardik Singh is now ruled out for the rest of the World Cup which is a huge blow for India. Harmanpreet Singh, India’s skipper will have to step up in his absence and make India’s attacking play count. Akashdeep Singh bagged a brace versus Wales and his confidence will be up and the likes of Samsher Singh and Harmanpreet Singh were also on the scoresheet which is a positive. India have looked susceptible to counter attacks and they will need to be compact against New Zealand.

Simon Child has been around for some time with New Zealand and his experience should come in handy against India. Nic Woods, the captain of the team, has a vital role to play in midfield and he is a brilliant carrier known for his ability to beat players with ease. The loss against Malaysia would still hurt the Black Sticks but they will be eager to learn from the mistakes.

Where to watch the Live Telecast of India vs New Zealand, Men’s 2023 Hockey World Cup match, on TV?

Star Sports Network have the broadcasting rights for the ongoing Men's Hockey World Cup 2023. So you can watch the Crossover match between India and New Zealand live on Star Sports 2, Star Sports Select 2 HD and Star Sports First. DD Sports will also provide a live telecast of the match for DD Free Dish users.

How to watch the Online Streaming of India vs New Zealand, Men’s 2023 Hockey World Cup match, in India?

The online streaming for India vs New Zealand Hockey Men's Hockey World Cup 2023 match will be available for the fans. You can enjoy the free live streaming of this game on the FanCode app and website. Disney+ Hotstar will also provide live streaming of the game. But fans will have to subscribe to the OTT platform to access it. India should win this game although expect a keenly contested match.

(The above story first appeared on LatestLY on Jan 22, 2023 11:44 AM IST. For more news and updates on politics, world, sports, entertainment and lifestyle, log on to our website latestly.com).