Hardik was the fulcrum of the midfield and the best player in the team as India put up a superb defensive display, shutting out the English. Hardik was all over the midfield, acting as the perfect link between the forwards and defenders. 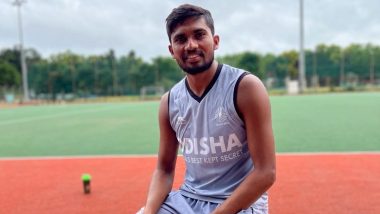 Bhubaneswar, January 21: Ahead of their Crossover stage match against New Zealand in the FIH Odisha Hockey Men's World Cup, India coach Reid Graham on Saturday backed skillful Rajkumar Pal, who has come as a replacement player of injured Hardik Singh, to perform well and called him one of the future stars.

After finishing second in their group courtesy a below par 4-2 win over Wales in their last game, hosts face New Zealand in a must-win match on Sunday with a place in the quarterfinals on the line. However, they will miss the services of key midfielder Hardik Singh, who had to withdraw from the tournament because of a hamstring injury he suffered towards the end of the match against England.

Hardik was the fulcrum of the midfield and the best player in the team as India put up a superb defensive display, shutting out the English. Hardik was all over the midfield, acting as the perfect link between the forwards and defenders. Indian Midfielder Hardik Singh Ruled Out of FIH Men's Hockey World Cup 2023 Due to Injury.

His absence was felt in the match against Wales as the forwards did get the right supply of passes as they went on the attack but the Indian coach is confident about the ability of the replacement in Rajkumar.

"Hardik is a good player and in very good form. But Raj is also in good form and one of our future stars. Those who have watched the games against NZ earlier would have seen some of the stuff he can do, so we are confident. He is very fit, works very hard in defence, has silky skills and he is handling the ball very well at the moment. We have enough talent to compensate," coach Reid said in the pre-match press conference.

The coach admitted that it will be India who will be under pressure in their knock-out crossover match as New Zealand have nothing to lose. But, he also backed his players to come good.

"It's true they have nothing to lose and pressure is on India. I also back my players to stand up under pressure and as I said earlier if we play our best, we can beat any team," he said.

Talking further about the opponent, the coach said," As an Australian myself, I know that New Zealand are always tough and we (India) have total respect for them. I am also confident that we will do our job (and win)," he added.

Notably, India beat New Zealand twice just a few months ago at the Kalinga Stadium in the Pro League matches and the 58-year old is hoping to repeat the result.

"We had beaten them twice then. Moreover, our defensive unit is more settled (and better) now than that time. So, we are looking forward to the match," Reid said.

During this World Cup,India have failed to convert their opportunities into goals. The Indians have entered the shooting circle on 76 occasions, but have managed to have only 37 shots at the goal and of which managed to score only six goals. They have earned 16 penalty corners but scored only three goals. Hockey World Cup 2023 Points Table.

Asked about the issue, Reid said,"I agree that we are lacking in finishing the opportunities we have created. But I would have been more worried had we not created opportunities. I am confident that we will be better in that aspect also."

(The above story first appeared on LatestLY on Jan 22, 2023 09:53 AM IST. For more news and updates on politics, world, sports, entertainment and lifestyle, log on to our website latestly.com).