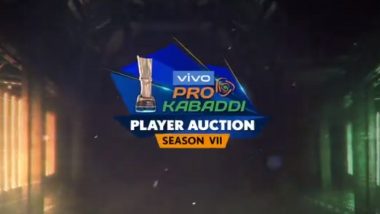 Mumbai, April 8: Iranian kabaddi players dominated the first phase of the Pro Kabaddi League (PKL) Season 7 auctions, as most of the franchisee showed interest in bagging their services and even indulged in some intense bidding. The auctions for foreign players started with a bang on Monday, as the first player named in the list -- Abozar Mighani -- drew everyone's attention with most of the franchisee trying their hands to rope in the Iranian defender.

Gujarat Fortune Giants were the first to bid for Abozar before Dabang Delhi and Bengal Warriors got involved in intense bidding for the Iranian. While U Mumba and Haryana Steelers too joined the bidding war, it looked like Patna Pirates would have the last laugh with their whopping Rs 75 lakh bid. However, they couldn't succeed as Telugu Titans exercised their Final Bid Match (FBM) right to rope in the Iranian for the second straight season. Pro Kabaddi League 2019: Anup Kumar to Coach Puneri Paltan in Season 7.

Abozar Mohajermighani is back with @Telugu_Titans for another stint as they snatched him away from @PatnaPirates using the Final Bid Match! Raise your hands if you're happy with this retention! 🙌🏻 #VivoProKabaddiAuction pic.twitter.com/htx4tbXTV2

Abozar's compatriot Mohammad Nabibaksh too drew a lot of attention when placed under the hammer. After some frenzied bidding by the franschisee, Nabibaksh, who had a base price of just Rs 10 lakh, was finally bagged by Bengal Warriors for a massive sum of Rs 75.75 lakh. Surprisingly, Bengal Warriors showed no interest in retaining star South Korean raider Jang Kun Lee, as Patna Pirates bought him for Rs 40 lakh. Lee had spent the previous six seasons with Bengal Warriors and was a lethal weapon in their armory. Lee is the top-scoring foreigner in the league's history with 433 points.

Meanwhile, it became clear that Patna Pirates wanted to boost it's raiding as after Lee, they bagged Iranian all-rounder Hadi Oshtorak for Rs 16 lakh. Another Iranian raider, Mohammad Maghsoudlou, attracted interest from U Mumba and Bengal Warriors in the early bids before they were joined by Haryana Steelers. But yet again, Patna Pirates had the last laugh as they picked Maghsoudlou for Rs 35 lakh.

Despite the auctions featuring players from several countries, even from the United States, the Iranians dominated the proceedings from start to finish as another Iranian -- Amir Hossein -- found home in Haryana Steelers. His compatriot Saeeb Ghafari, a young defender, was pocketed by Dabang Delhi for Rs 16.5 lakh.

Apart from the Iranians, the South Koreans too attracted some interest. U Mumba and and Haryana Steelers locked horns for Korean raider Dong Geon Lee before the former roped him in for Rs 25 lakh. U Mumba also took home another South Korean, Young Chang Ko, for Rs 10 lakh. UP Yoddha then bagged Iran's Mohsen for Rs 21 lakh while defending champions Bengaluru Bulls roped in Nepal's Lal Manohar Yadav for Rs 10 lakh.

(The above story first appeared on LatestLY on Apr 08, 2019 06:37 PM IST. For more news and updates on politics, world, sports, entertainment and lifestyle, log on to our website latestly.com).