Neeraj Chopra's record throw of 86.48 meters at the IAAF World U20 Championships not just made him India’s first-ever world champion in Javelin Throw but also helped put India on the world map for javelin throw. Neeraj was an overnight star but he lived up to it with a series of admirable performances. 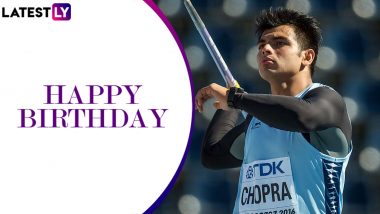 Neeraj Chopra celebrates his 22nd birthday on December 24, 2019 (Tuesday). The sturdy teenager from Haryana already has an Asian Games, Commonwealth Games and multiple national records to his name. Neeraj also holds the national record for Javelin throw and has already rewritten it three times in the space of a year. He created a Junior world record at the 2016 IAAF World U20 Championships with an 86.48m throw which not only bagged him the gold medal but also put his name in the elite world list of record creators. By the time he became a junior champion, Neeraj had already won a gold medal at the South Asian Games where he also equalled the national record before surpassing it. On Neeraj Chopra’s 22nd birthday, take a look at some interesting facts about the star Indian javelin thrower.

Neeraj weighed 80 kilos as an 11-year-old kid with his love for roti and ghee augmenting his calories intake. The young boy from Khandra village in Panipat, Haryana always had his family on his ears, who wanted Neeraj Chopra to take up sports. Neeraj started as a sprinter and was attracted to cricket for much of his practise time at the Panipat Stadium but everything hanged once he noticed his senior Jaiveer take up a strange-looking rod-like spear with sharp enders and throwing it up in the air. Neeraj tried it a couple of days after constantly watching Jaiveer do it. Take a look at some interesting facts about the ace Indian javelin thrower.

His record throw of 86.48 meters at the IAAF World U20 Championships not just made Neeraj India’s first-ever world champion in Javelin but also helped put India on the world map for javelin throw. Neeraj was an overnight star but he lived up to it with a series of admirable performances. In his last tournament before the elbow injury, Neeraj finished fourth at the IAAF Diamond League of 2018. He has been out with the elbow injury ever since but is back for training and has his eyes set on the 2020 Tokyo Olympics. Happy Birthday Neeraj Chopra.

(The above story first appeared on LatestLY on Dec 24, 2019 08:05 AM IST. For more news and updates on politics, world, sports, entertainment and lifestyle, log on to our website latestly.com).