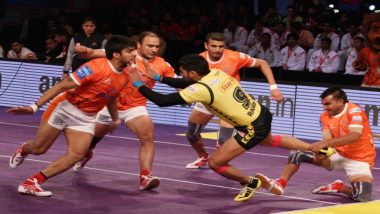 Former champions U-Mumba led for large parts but eventually succumbed to the grit of local rivals Puneri Paltan and settle for an entertaining 32-32 draw in the opening day's second game of the Pro Kabaddi tournament here at the packed Jawaharlal Nehru Indoor Stadium on Sunday.  After inflicting the only all out of the match in latter stages of the first half, U Mumba pulled away from 20-20 at one stage early on in the second period to lead by two points in the dying seconds of the tie.

But a successful raid from Monu followed by the Pune defence hacking down U Mumba's star raider Siddharth Desai to the mat dashed U Mumba's hopes of starting afresh after a dismal previous season where they lost four of their last five matches to miss out from the qualification scenario for the playoffs. Nitin Tomar racked up 15 raid points for Pune while Desai scored one less for U Mumba as both the Maharashtra sides fought tooth and nail till the final whistle in an exhibition of fitness shown by both sets of players. Check out the video highlights of the match here.

With the result, U Mumba has now failed to get past Pune on five occasions in the last six meetings. There was nothing to choose between teams for much of the first period barring U Mumba inflicting an all out on their local rivals who frittered their three-point lead at one point (9-6) to trail 14-18.

However, two successful raids from Nitin Tomar coupled with Siddharth Desai failing to get the better of Pune defence helped Pune end the half at 18-20. Post the breather, Monu helped Pune take the first point with a successful raid. Abhishek Singh faltered for U Mumba to level proceedings at 20-20 but Rohit Baliyan restored his side's lead to two points.

In form Siddharth then scored a super raid to stretch U Mumba's lead to four points (21-25) but Tomar kept Pune in the game till the end and his efforts paid off when first Monu raided successfully followed by the Pune defence hacking Siddharth to the mat to level proceedings.

(The above story first appeared on LatestLY on Oct 07, 2018 11:51 PM IST. For more news and updates on politics, world, sports, entertainment and lifestyle, log on to our website latestly.com).