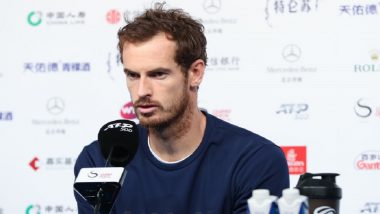 London, July 23: Former World Number 1 Andy Murray and current British No.1 Johanna Konta are set to participate in the Battle of Brits Team Tennis tournament, which is being organised by Jamie Murray.

The format of the tournament will see two teams competing at the National Tennis Centre July 27 onwards. Murray is part of the Union Jacks team which is led by captains Judy Murray and Greg Rusedski while Konta is part of the British Bulldog team which will be captained by Anne Keothavong and Leon Smith.

Murray had, last month, also taken part in another exhibition tournament but had to pull out of the third-place play-off. This was the first event Murray featured following a seven-month long injury gap.

He had recently also opened the door for his participation at this year's US Open despite the ongoing coronavirus crisis. It was announced in June that the US Open will be held according to its original schedule from August 31 with the Cincinnati Open being held at the Flushing Meadows before that from August 22.

"I would go and play provided that we are given the assurance that it'll be safe to go," Murray was quoted as saying by Daily Mail.

(The above story first appeared on LatestLY on Jul 23, 2020 07:07 PM IST. For more news and updates on politics, world, sports, entertainment and lifestyle, log on to our website latestly.com).