Djokovic had a time to forget in this year's Olympics. Entering the competition as favourite to win the title, he lost the semi-final match to Alexander Zverev and then suffered a shock defeat to Pablo Carreno Busta in the bronze medal match. He subsequently withdrew from the mixed doubles bronze medal match with an injury. 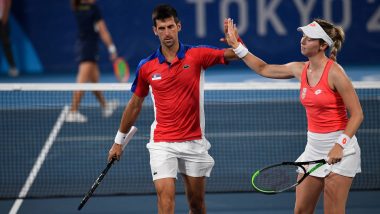 Novak Djokovic's sojourn at the Tokyo Olympics 2020 ended on a disappointing note after he decided to pull out of the mixed doubles bronze match against the Australian pair of Ashleigh Barty and John Peers. The Serbian star, according to reports, suffered a 'left shoulder injury' and hence decided to withdraw from the match, leaving Barty and Peers as winners of the bronze medal courtesy of a walkover. But one has to feel for Djokovic's partner Nina Stojanovic, who too would lose out on a medal, considering the fact that she had reached the first Grand Slam final in her career. However, Barty, who had lost in the very first round in the singles competition, would be happy to end with a bronze medal alongside Peers. Novak Djokovic Smashes and Throws Tennis Racket During Bronze Medal Match Against Pablo Carreno Busta at Tokyo Olympics 2020 (Watch Videos)

Novak Djokovic withdraws from the mixed doubles bronze medal match due to a left shoulder injury.

Ashleigh Barty and John Peers receive a walkover against Djokovic and Nina Stojanovic and win the bronze medal for Australia.

Djokovic, who had won the Wimbledon title recently, was a favourite to win the gold medal at the Tokyo Olympics but those hopes were shattered when he suffered a loss to Alexander Zverev in the semi-final. This loss also meant that his chances of a golden Grand Slam also faded.

The worst was still in store for Djokovic, who suffered a three-set loss to Pablo Carreno Busta in the bronze medal match. Frustrated and angry, the Serbian star player was seen smashing and throwing his racket in the court. That was something uncharacteristic of him in recent times, given the form he has been in. His injury would definitely be something to worry about, given the fact that the US Open would begin in a month and he would once again be a favourite to win the title.

(The above story first appeared on LatestLY on Jul 31, 2021 08:46 PM IST. For more news and updates on politics, world, sports, entertainment and lifestyle, log on to our website latestly.com).