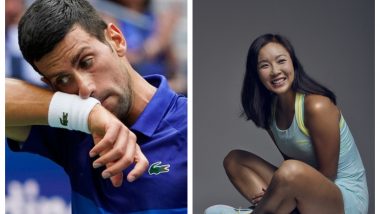 Novak Djokovic has raised concern after Chinese tennis star Peng Shuai went missing. He said that he was shocked with the entire development and hopes that she returns soon. Djoko said that he has seen the tennis star during the previous tournament and hoped that is safe. "It's not much more to say than hope that she will be found, that she's OK. It's just terrible. I can imagine just how her family feels that she's missing," said Djokovic. A few days, now Chinese tennis star Peng Shuai has been in the news. Naomi Osaka Raises Concerns After Peng Shuai Goes Missing, Chinese Tennis Star Had Accused Ex-Vice-Premier Zhang Gaoli of Sexual Assault.

The tennis star had spoken candidly about how she was abused sexually by a senior Chinese official. Peng Shuai took to microblogging website Weibo and revealed scandalous details of being assaulted sexually by Zhang Gaoli and also said that they had an on and off consensual affair. Post this, it is reported that the tennis star has gone missing. Naomi Osaka had also raised her concerns about the tennis star's disappearance. The Japanese tennis star had posted a tweet on social media and said that censorship was not okay at any cost. "I hope Peng Shuai and her family are safe and OK. I’m in shock of the current situation and I’m sending love and light her way. #whereispengshuai," she had tweeted alongside the picture of the Chinese tennis star.

Peng Shuai's Weibo account is active but she hasn't posted anything for days now. Also, there is no mention of Zhang in any of these posts. All her fans are hoping for her to return safely.

(The above story first appeared on LatestLY on Nov 17, 2021 04:34 PM IST. For more news and updates on politics, world, sports, entertainment and lifestyle, log on to our website latestly.com).