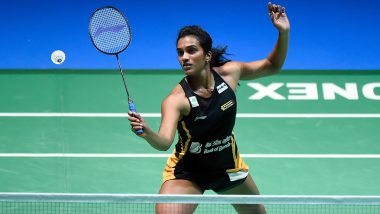 Hyderabad, January 27: Ace shuttler and Olympian P. V. Sindhu, an innovative farmer and a puppeteer were among five personalities from the Telugu states awarded this year's Padma awards.

Sindhu, who was born in Hyderabad (Telangana) but whose parents hail from Andhra Pradesh, was awarded the Padma Bhushan, the third highest civilian award while four others received Padma Shri awards. Padma Awards 2020: Olympic Medalist Mary Kom to Be Awarded Padma Vibhushan, Shuttler PV Sindhu to Get Padma Bhushan.

Sindhu, a silver medallist at 2016 Rio Olympics, was elated over being awarded Padma Bhushan. The 24-year-old reigning badminton world champion considers this as the greatest honour.

"This has been a great beginning for this year, to receive one of the greatest honours of the country Padma Bhushan. It shows the commitment of the Government of India towards sports to inspire more people to excel in this field," Sindhu tweeted.

She thanked the Sports Ministry, the Badminton Association of India (BAI) and the Chief Ministers of Telangana and Andhra Pradesh for their support and encouragement. Sindhu, the only Indian world champion in badminton who earlier received Padma Shri, said this honour would encourage her to move forward with renewed spirit and power.

Venkat Reddy, an innovative farmer and plant breeder, was awarded his contribution to increased agricultural output through organic farming. Hailing from Alwal on the outskirts of Hyderabad, he developed expertise in soil and nutrient management.

The soil fertility process, which he developed in 2002, improved fertility in cultivated lands (depleted soil) with no inputs of chemical fertilisers leading to high yields with high nutritive value in grapes, rice, wheat and vegetables.

He applied for patents for this technology in 60 countries and received patents from several countries including India, South Africa, Madagascar, Mexico, Philippines, Vietnam, Australia as well as some European nations.

Another Padma Shri awardee from Telangana is Sanskrit scholar Vijayasarathi Sribhashyam. Hailing from Karimnagar district, he is a renowned scholar and authored several books. Interestingly, he has his early education in Urdu medium.

Vijayasarathi also founded two organizations for promotion of Sanskrit and Indian culture. Puppeteer Chalapathi Rao has been awarded Padma Shri for his contribution to keep this art form alive. Puppetry was a much sought-after form of entertainment in the pre-TV and cinema era.

Hailing from Anantapur district of Andhra Pradesh, the 78-year-old has been engaged in the art of leather puppetry for generations. Elated over being picked up for Padma Shri, Rao said that this is an award to the vanishing craft of leather puppetry. He hopes that this honour would give a fresh lease of life to the art.

Rao, his seven brothers and most of his other relatives dedicated their lives to the art of crafting leather puppets and organising puppetry shows across the country and abroad.

Yadla Gopal Rao, a theatre artiste from Srikakulam district of Andhra Pradesh, will receive Padma shri. The 70-year-old, who hails from a family of theatre artistes, feels the award was recognition for his contribution to the world of theatre. Padma Awards 2020: Mary Kom, PV Sindhu and Zaheer Khan to Receive Prestigious Awards.

Involved with theatre from a young age, he performed 5,600 shows. He is well known for performing Gayopakhayanam and mythological plays like Satya Harishchandra. Rao, whose first theatre performance was in 1964, also learnt music from his paternal uncle Yadla Satyam. This helped in his career as a theatre artiste.

(The above story first appeared on LatestLY on Jan 27, 2020 08:47 PM IST. For more news and updates on politics, world, sports, entertainment and lifestyle, log on to our website latestly.com).