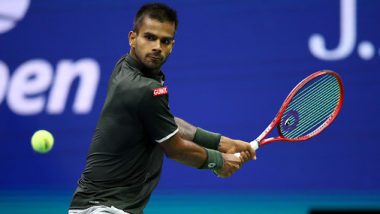 The day 2 of the Australian Open 2021 will offer the mouth-watering game between Sumit Nagal and Ricardas Berankis. The men’s singles event will be held on Court number 17 at the Melbourne Park. In this article, we shall bring to you the live streaming details of the match between Sumit Nagal and Ricardas Berankis. But before that, let’s have a look at the preview of the match. The Indian tennis ace is ranked 139 and is a wild card entrant in the Australian Open 2021. The wild card entrant does not have to go through the qualifying round and is granted an entry without playing the qualifiers. 'Sumit Nagal Is Going to Have a Solid Career', Says Roger Federer.

The Indian tennis stalwart is also among the 72 players who have not been forced to quarantine. Prior to that, he was down with a shoulder injury. “Two months of the last year went into recovering from an injury. And then I came here hoping to get to practise for two weeks and then if I didn’t get to leave the room at all, that would have been awful,” he said during an interview. Nagal’s form has not been up to the mark in the Australian Open 2021 and will look to overturn things. Now, let’s have a look at the live streaming details of the game.

Sumit Nagal vs Ricardas Berankis first-round match in men’s singles will be played at the Melbourne Park. The game will be held on February 9 (Tuesday) and it has a tentative start time of 08:45 pm IST (Indian Standard Time).

Fans can also follow the game online. As Sony Pictures holds the broadcast rights for the Australian Open 2021, SonyLiv will be live streaming the Sumit Nagal vs Ricardas Berankis men’s singles first-round match online for fans in India.

(The above story first appeared on LatestLY on Feb 09, 2021 08:14 AM IST. For more news and updates on politics, world, sports, entertainment and lifestyle, log on to our website latestly.com).