US Open 2020: Grigor Dimitrov 'Uncertain' Over New York Participation After Battling Past COVID-19 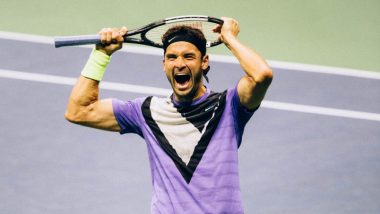 London, August 5: Bulgarian tennis star Grigor Dimitrov remains uncertain over his participation at this year's US Open as he tries to regain his full fitness after battling past COVID-19 recently.

Dmitrov was one of the few players who had tested positive for the deadly virus after taking part in Novak Djokovic's disastrous Adria Tour exhibition event in June.

Dimitrov made a return to the court late last month as he took part in Ultimate Tennis Showdown exhibition event in France. But according to his own admission, he doesn't know yet if he will touch down in New York for the Grand Slam this year or not.

"Right now, I'm very uncertain, I'll be completely honest," Dimitrov was quoted as saying by Sky Sports. "I thought about it and I keep thinking about it every single day. I feel like there are so many questions I have to ask and there are so few answers. US Open 2020: From Rafael Nadal, Nick Kyrgios to Ashleigh Barty, List of Players Who Have Opted Out of the Grand Slam Event.

"I've had it, so I know what it is. For Europeans, it's hard because you have got to travel about 12 hours to get to New York and take a couple of planes, then get to a hotel, and the bubble is a bubble, but I mean statistically we're like over a thousand people in the same place and it's just not easy," he added.

Earlier, defending champion Rafael Nadal pulled out of the US Open citing COVID-19 issues in the city. Australian tennis star Nick Kyrgios has also opted against taking part in the tournament.

Meanwhile, World No. 1 women's star Ashleigh Barty also pulled out of this year's US Open due to concerns over the COVID-19 pandemic.

The US Open is currently scheduled to be held from August 31 with the Cincinnati Open being held at the Flushing Meadows before that from August 22.

(The above story first appeared on LatestLY on Aug 05, 2020 06:55 PM IST. For more news and updates on politics, world, sports, entertainment and lifestyle, log on to our website latestly.com).