US Open 2020: From Rafael Nadal, Nick Kyrgios to Ashleigh Barty, List of Players Who Have Opted Out of the Grand Slam Event

Tennis finally resumed on Monday after a wait of five months with the WTA Palermo Open getting underway on Monday (August 3) ahead of the US Open. A limited number of fans were also allowed in the clay-court tournament with fans needing to observe social distancing and quarantine rules while attending a match at the 1,500 seat stadium. 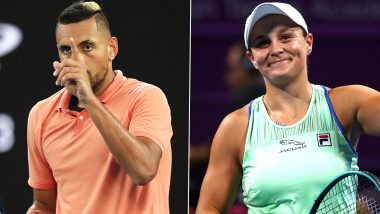 Amid a global pandemic and the rising number of coronavirus cases, the United States Tennis Association (USTA) have decided to proceed with its plans of hosting the US Open from August 31 as per schedule. Despite the criticism and threats of top players withdrawing from the Grand Slam event due to fears over safety and travel, the USTA had announced on Friday that they plan to organize the tournament per schedule. Rafael Nadal, Ashleigh Barty and Nick Kyrgios have already publicly opted out of the US Open 2020 tournament, we take a look at other players who have opted out of the Grand Slam event. Roger Federer Surprises Italian Rally Sensations, Joins Them in Rooftop Tennis Match (Watch Video)

Tennis finally resumed on Monday after a wait of five months with the WTA Palermo Open getting underway on Monday (August 3) ahead of the US Open. A limited number of fans were also allowed in the clay-court tournament with fans needing to observe social distancing and quarantine rules while attending a match at the 1,500 seat stadium. Leander Paes Reignites Olympic Fever, Shares Photo Of Unique Breakfast For 'Olympians'.

A few exhibition tours, including the much-maligned Adria Tour, were played in between May and July with few top-ranked players contracting the virus during those tournaments leading to fears over the resumption of tennis and the organizing of a major tournament amid the pandemic. Take a look at the list of players, who have already opted out of the US Open 2020 event.

Defending US Open champion Rafael Nadal has announced his decision to skip the 2020 event of the Grand Slam tournament. “After many thoughts, I have decided not to play this year’s US Open. The situation is very complicated worldwide, the COVID-19 cases are increasing, it looks like we still don’t have control of it,” the 34-year-old said in a statement on Instagram. Rafael Nadal Pulls Out of US Open 2020, Says 'COVID-19 Cases Increasing'.

Defending French Open champions, Ashleigh Barty opted out of the US Open 2020 event citing concerns about travelling during the coronavirus pandemic. She also confirmed that she will not play the Western & Southern Open in Cincinnati. “I love both events so it was a difficult decision,” Barty said in a statement when announcing her decision. “But there are still significant risks involved due to Covid-19, and I don’t feel comfortable putting my team and I in that position.”

Another Australian Nick Kyrgios also announced that he will skip the 2020 edition of the US Open. “I will not be playing this year at the U.S. Open,” Kyrgios, who was knocked out of the third round in Flushing Meadows last year, said in an Instagram video.

Unlike Barty and Kyrgios, women’s World No 1 and defending Wimbledon champion Simona Halep has not officially/publicly opted out of the US Open but suggested she will not travel outside Europe this year. The Romanian skipped the Palermo Open despite initially agreeing to compete and announced that she will instead play in the Prague clay-court tournament later this month to prepare for the French Open in September.

Former French Open champion Jelena Ostapenko also announced that she will skip the US Open as “it’s too dangerous.” Jelena, ranked fifth in WTA rankings, told Latvian media she will not travel to the United States for any tournaments this year. "I like to spend time at home, live a normal life," she said.

The 28-year-old Chinese tennis professional, who knocked out Serena Williams in the third round of the Australian Open earlier this year, has also announced her decision to opt of the 2020 US Open and Western & Southern Open events.  “I’m very sad that I have to make this announcement,” said Wang. “Due to travel restrictions and safety concerns, my team and I have to withdraw from the Western & Southern Open and US Open. It is a tough decision for me.”

Last year’s French and US Open finalist, Alexander Zverev, is still unsure of his participation in the US Open. "I will see because the situation right now in the U.S. is not that great so I don't know what we will decide with my team," the 23-year-old told Tennis Majors website on Monday. "I want to play tournaments, but I think the U.S. right now is a little bit of a funny place."

Three-time Grand Slam champion, Andy Murray is ready to risk of flying to the United States for the Cincinnati and US Open later this month if layers are given assurance that will be exempted from mandatory quarantine in between tournaments.

The 30-year-old will only travel to the United States for US Open 2020 after the draw for the tournament. "I will make a decision about travelling to the US once I see the draw," Prajnseh, who made his US Open finals debut last year told the Times of India. If I am favourably placed I will get in touch with the Indian authorities to arrange my travel. I do not plan to play any tournaments before the US Open."

Federer, who last won the US Open in 2008 and his last Grand Slam trophy two years ago will also not be present at the Flushing Meadows come August 31. But unlike others, he did not have the option and was ruled out of the entire 2020 calendar year due to a setback in his recovery from surgery on his right knee.

(The above story first appeared on LatestLY on Aug 04, 2020 12:48 AM IST. For more news and updates on politics, world, sports, entertainment and lifestyle, log on to our website latestly.com).