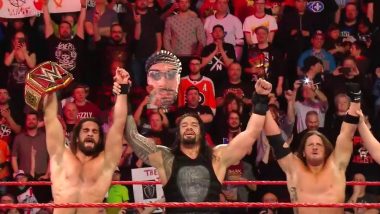 World Wrestling Entertainment (WWE) RAW episode on April 15, 2019, saw many superstars from the blue brand of WWE enter the red brand. The Phenomenal AJ Styles joined RAW in the first night of Superstar Shake up as he became the mystery partner for Roman Reigns and Seth Rollins in the six-man tag team main event match against Bobby Lashley, Drew McIntyre and Baron Corbin. Let us go through the result and highlights of this past episode of Monday Night RAW. WWE RAW April 8, 2019 Results and Highlights: The Deadman Undertaker Appeared on the Show Just a Night After WrestleMania 35 (Watch Videos)

This week RAW action took place at Bell Centre, Montreal, QC. The show kicked off with Stephanie McMahon announcement os superstar shake-up. Shane McMahon was alongside her sister Stephanie, when Stephanie was about to make the first superstar shake up change, The Miz attacked Shane McMahon from behind. Click here to see how The A-lister assaulted Shane O Mac.

Andrade superstar from SmackDown challenged Finn Balor in a non-title match. The Irish man Balor lost to Andrade in the latter’s Raw debut following a Superstar Shake-up brand jump. Apart from this Raw and SmackDown Women's Champion Becky Lynch was challenged by Natalya and Lacey Evans. Natalya and Lacey Evans fought with each other for the No.1 contender spot to face The Man Becky in a title match. Lacey Evans defeated Natalya to earn a Raw and SmackDown Women’s Championship opportunity.

Some glimpses from the last episode of Monday Night Raw

.@LaceyEvansWWE narrowly escapes @NatbyNature's Sharpshooter in this high-stakes matchup to see who will challenge @BeckyLynchWWE for the #RAW Women's Title! #RAW #SuperstarShakeUp pic.twitter.com/JYXY5FlMbp

"I'm here to look you in the eyes...and let you know that I'm the best there is, the best there was, and the best there ever WILL be, and I'm coming after the #RAW #WomensChampionship!" - @NatbyNature #SuperstarShakeUp pic.twitter.com/7FpeAYnQwZ

6. Naomi and Bayley defeat The IIconics.

WWE has indeed prepared a plan to built up the flow for the WrestleMania 36. Click here to view the highlights of WWE RAW April 15, 2019. The Superstar shake-up will continue on WWE SmackDown too. Stay updated to our website- Latestly for more news on WWE.

(The above story first appeared on LatestLY on Apr 16, 2019 10:57 AM IST. For more news and updates on politics, world, sports, entertainment and lifestyle, log on to our website latestly.com).