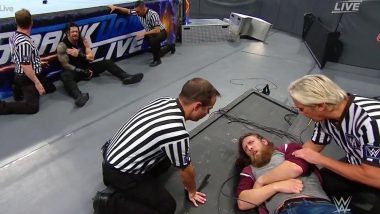 WWE SmackDown Sept 3 episode was full of entertaining and thrilling action, as we saw King of the Ring 2019 quarter-final competition continue. Elias and Chad Gable qualify to the semi-final round. Erick Rowans attack Roman Reigns and Daniel Bryan. Let us see below what all happened in the past episode of the blue brand of WWE. We will help you with the results and highlights of the show. WWE Raw September 2, 2019 Results and Highlights: Becky Lynch to Face Sasha Banks For Women’s Championship Match at Clash of Champions (View Pics & Videos)

Elias and Ali fought their heart out in the quarter-final match. However, in the end, the result went in favour of Elias. In the other quarter-final match of this tournament, Chad Gable won against Andrade. Shinsuke Nakamura defeated R-Truth and became new 24x7 champion. Nakamura will also defend his Intercontinental Belt against The Miz at WWE Clash of Champions 2019. WWE SmackDown Aug 27, 2019 Results and Highlights: Erick Rowans True Culprit Behind Roman Reigns Attack, Ali & Chad Gable Qualifies for the Quarter-Final of King of Ring (View Pics & Videos)

WWE SmackDown champion Kofi Kingston was brutally attacked by Randy Orton and The Revival. Fans were eagerly waiting to know whether Roman Reigns will apologise Daniel Bryan or not, as the Big Dog hit him with the spear last week. Unfortunately, the moment when Roman Reigns entered the ramp to reply Bryan, he was attacked by Erick Rowans from behind. When Daniel Bryan told him to stop the assault on Reigns, Rowan slammed his own partner on the commentary table.

.@WWERomanReigns is attacked yet again by @ERICKROWAN on #SDLive. pic.twitter.com/EKrSzvJACA

No one tells @ERICKROWAN what to do. #SDLive @WWEDanielBryan pic.twitter.com/yfWYflHU0W

.@WWEGable is NOT letting the short jokes get to him and showing everyone just how great he is! #SDLive pic.twitter.com/n03BZV9gMd

Kofi Got Caught in The Viper Trap

Good news for SmackDown viewers is that The Deadman Undertaker will appear on the show. Also next week we will know the two finalists for King of Ring 2019 amongst Samoa Joe, Ricochet, Baron Corbin, Elias and Chad Gable. Joe vs Ricochet vs Corbin will face in a triple-threat match on Raw next week in the semi-final, while Elias and Chad Gable will lock horns with each other on SmackDown.

(The above story first appeared on LatestLY on Sep 04, 2019 09:51 AM IST. For more news and updates on politics, world, sports, entertainment and lifestyle, log on to our website latestly.com).