Polish video game developer CD Projekt Red has announced that the Cyberpunk 2077 game release date has been pushed back by 21 days, and it will now release on December 10. 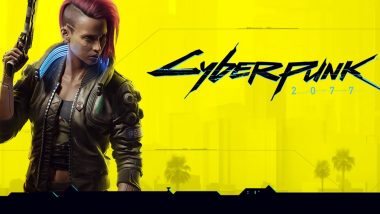 San Francisco, Oct 28: Polish video game developer CD Projekt Red has announced that the Cyberpunk 2077 game release date has been pushed back by 21 days, and it will now release on December 10. Cyberpunk 2077 Video Game to Arrive on Google Stadia on November 19, 2020.

"The biggest challenge for us right now is shipping the game on current-gen, next-gen, and PC at the same time, which requires us to prepare and test nine versions of it," the company said in a tweet on Tuesday.

We have important news to share with you pic.twitter.com/qZUaD6IwmM

It was originally scheduled to release in April and then was pushed back to September, before another delay to November 19. The delay is apparently due to the challenge of launching the title on what amounts to nine different platforms while everyone on the team works from home.

"We need to make sure everything works well and every version runs smoothly. We're aware it might seem unrealistic when someone says 21 days can make any difference in such a massive and complex game, but they really do," the company said.

Cyberpunk 2077 is adapted from the Cyberpunk franchise, the story takes place in dystopian Night City, an open world with six distinct regions. Players assume the first-person perspective of a customisable mercenary known as V, who can acquire skills in hacking and machinery, an arsenal of ranged weapons, and options for melee combat.

Google announced the game was coming to Stadia all the way back in August 2019, but didn't reveal a final release date. The game was set to launch on other platforms on April 16, but it was delayed twice this year to its current November 19 release date. Those who buy the game via the Stadia Store will receive a set of Cyberpunk 2077-themed digital goodies.

(The above story first appeared on LatestLY on Oct 28, 2020 01:19 PM IST. For more news and updates on politics, world, sports, entertainment and lifestyle, log on to our website latestly.com).