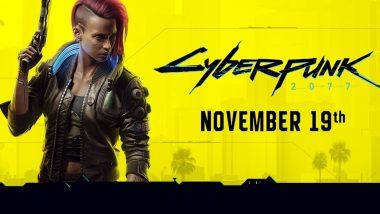 "Cyberpunk 2077 is coming to @GoogleStadia on November 19. This means you will be able to explore Night City across your favorite devices instantly right when the game becomes available," the company said in a tweet.

Cyberpunk 2077 is coming to @GoogleStadia on November 19th!

This means you will be able to explore Night City across your favorite devices instantly right when the game becomes available. Pre-order now at: https://t.co/UOqkinGRHB pic.twitter.com/ZwNav1d5fJ

Cyberpunk 2077 is adapted from the Cyberpunk franchise, the story takes place in dystopian Night City, an open world with six distinct regions. Players assume the first-person perspective of a customisable mercenary known as V, who can acquire skills in hacking and machinery, an arsenal of ranged weapons, and options for melee combat.

Google announced the game was coming to Stadia all the way back in August 2019, but didn't reveal a final release date. The game was set to launch on other platforms on April 16, but it was delayed twice this year to its current November 19 release date.

Those who buy the game via the Stadia Store will receive a set of Cyberpunk 2077-themed digital goodies. These include the game's original score, art booklet, the original Cyberpunk 2020 sourcebook and Cyberpunk 2077: Your Voice comic book, as well as a set of wallpapers for desktop and mobile.

(The above story first appeared on LatestLY on Oct 16, 2020 03:48 PM IST. For more news and updates on politics, world, sports, entertainment and lifestyle, log on to our website latestly.com).