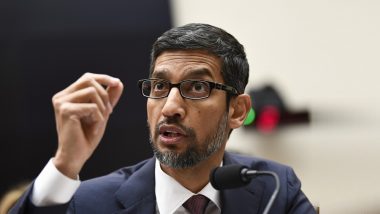 Google search results can be hilarious sometimes! And, one such instance is that Donald Trump appears when searched for word 'idiot'. In order to understand, how Google search engine algorithms function, a Democratic congresswoman has asked CEO Sundar Pichai regarding the same. During the congressional hearing regarding privacy and data collection, Rep. Zoe Lofgren executed searches from the podium and asked the CEO that the image results for the word idiot reveals a page of Donal Trump images. Sunder Pichai Testifies Before Congress Committee; Denies Google Having Any Political Bias.

She said that, "If you Google the word 'idiot' under images, a picture of Donald Trump comes up. How would that happen? How does search work so that that would occur?"

Congresswoman to Google CEO: Why when I search "idiot" do I get pictures of Trump? https://t.co/kqIcNV3Ng3

Testifying before the House Judiciary Committee, Google chief executive Sundar Pichai explained the technicalities involved in how the algorithms function. He also mentioned that the algorithms take into account some 200 factors, which includes popularity, relevance, how others are using the search term. All these factors are taken into consideration to determine how to best match a query with results. Google Has No Plans to Launch Search Engine in China: Sunder Pichai.

Zofgren frivolously further asked, "So it's not some little man sitting behind the curtain figuring out what we're going to show the user. It's basically a compilation of what users are generating, and trying to sort through that information?

It's true - @realDonaldTrump is an idiot pic.twitter.com/8RvSnp2qmd

As per the allegations, Zofgren reacted that Google employees influence results for political reasons. The hearing revealed lawmakers' the basic understanding of how the internet works and proffered a platform to them for complaining about the unfavourable search results. Google CEO Sundar Pichai Grilled by US Lawmakers on Data Breach, China Censorship Demands.

Google the word “idiot” in images and see what comes up @realDonaldTrump @POTUS #idiot #DonaldTrump pic.twitter.com/0Uv3sWcqdb

Moreover, Rep. Lamar Smith, R-Texas – also questioned Sundar Pichai if he has ever ordered any of the employee to alter the search results. Answering to that question, Pichai explained that it is not possible for an individual, or even a group of people, to do that because it is a long process and they are multiple steps involved in the process.

(The above story first appeared on LatestLY on Dec 12, 2018 01:31 PM IST. For more news and updates on politics, world, sports, entertainment and lifestyle, log on to our website latestly.com).