The Mobile World Congress event (MWC 2021) in Barcelona will begin today. Samsung, the South Korean tech company is expected to launch its Galaxy Watch 4 and Galaxy Buds 2 tonight during the event. 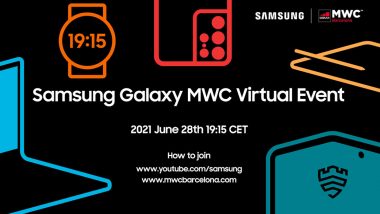 The Mobile World Congress event (MWC 2021) in Barcelona will begin today. During the event, several tech companies showcase, announce or launch their products. As such, Samsung, the South Korean tech company is also expected to launch its Galaxy Watch 4 and Galaxy Buds 2 tonight during the event. Samsung Galaxy MWC virtual launch event is expected to commence at 7:15 pm CET (10:40 pm IST) and will be live-streamed via Samsung's official YouTube channel and Samsung Newsroom. Samsung Galaxy A22 Smartphone Reportedly Price Leaked Ahead of India Launch.

As per a report, Samsung has revealed in its launch invite that it will be showcasing how the Galaxy ecosystem of connected devices is set to provide people with even greater possibilities for enriching their lifestyles.

Ready to learn how the Galaxy Experience can empower you?

Tune in to the virtual Samsung Galaxy session at the Mobile World Congress #MWC21 on Monday, 28 June: https://t.co/a5dH36ojEN pic.twitter.com/4pZRGCLP4B

The company also reportedly shared that it will be unveiling its vision for the future of smartwatches at the MWC 2021 event. 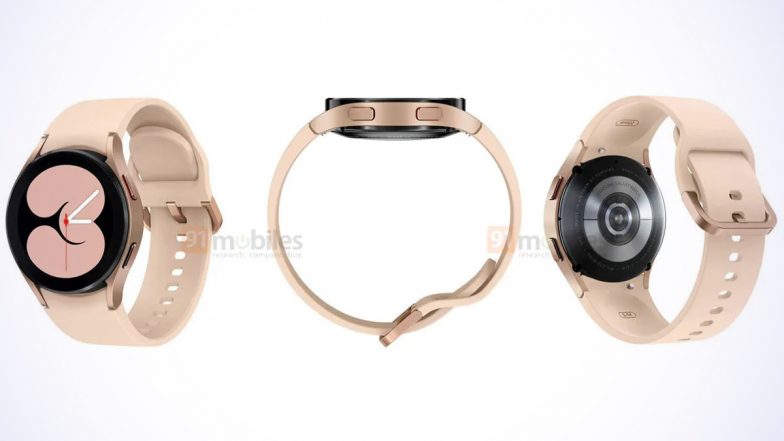 The Galaxy Watch 4 is likely to run on Google's WearOS and Samsung's Tizen OS. The upcoming Galaxy Watch will reportedly support all Google Play Store apps including Maps, Gmail and YouTube. It is also likely to come with more battery life. Ahead of the MWC 2021, 91 Mobiles have leaked the images and render of Galaxy Watch 4. As per 91 Mobiles, the upcoming smartwatch will come in two sizes - 42mm and 46mm. It will feature Bluetooth, NFC and multiple LTE bands and will be 5ATM water-resistant. Both models of the smartwatch are expected to be fuelled by a 240mAh battery. On the other hand, there is no information available about the Galaxy Buds 2.

(The above story first appeared on LatestLY on Jun 28, 2021 03:26 PM IST. For more news and updates on politics, world, sports, entertainment and lifestyle, log on to our website latestly.com).