Xiaomi India will launch the 11 Lite 5G NE smartphone in India tomorrow at 12 pm IST. The smartphone is touted as the slimmest and lightest 5G offering from the brand. The prices of the handset will be announced during the launch event. 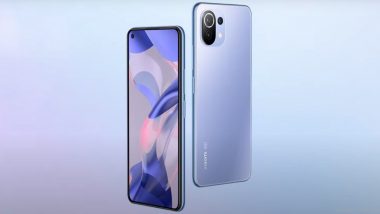 The Chinese smartphone maker Xiaomi is all set to launch the Xiaomi 11 Lite 5G NE in India tomorrow. The phone is touted as the slimmest and lightest 5G offering from the brand. The prices of the handset will be announced during the launch event at 12 pm IST. The company will stream the launch on its social media platforms and official YouTube channel. Xiaomi 11 Lite 5G NE To Be Launched in India on September 29, 2021.

The upcoming handset is essentially an upgraded version of the Mi 11 Lite that was launched a few months ago. It's worth noting that the phone is already on sale in Europe. The India-specific model is expected to remain identical to the Euro-spec version. If the company does that, the phone will get a Qualcomm Snapdragon 778G SoC, Dolby Vision support, 5G connectivity, up to 256GB of built-in storage, and more. From shopping to playing music, all this is just 1 tap away!

Our #Xiaomi11LiteNE5G is here to make lives easy with it’s New Way To Pay feature.

As far as specifications are concerned, the Xiaomi 11 Lite 5G NE will boast a 6.5-inch FHD+ AMOLED display with a 90Hz refresh rate and a resolution of 1080x2400. The panel will also support Dolby Vision. Under the hood, it will be powered by an octa-core Qualcomm Snapdragon 778G SoC, paired with up to 8GB of RAM and 256GB of built-in storage. It runs on MIUI 12.5 based on Android 11 OS out-of-the-box.

For photos and video, there will be triple rear cameras consisting of a 64MP primary lens, an 8MP ultra-wide shooter and a 5MP telemacro snapper. Upfront, there could be a 20MP snapper for selfies and video calls. The phone is said to pack a 4,250mAh battery with 33W fast charging support.

(The above story first appeared on LatestLY on Sep 28, 2021 11:06 PM IST. For more news and updates on politics, world, sports, entertainment and lifestyle, log on to our website latestly.com).