At least 111 Taliban militants were killed in the last 24 hours across Afghanistan, the Ministry of Interior said in a statement. 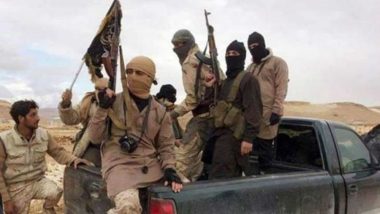 Kabul, June 12: At least 111 Taliban militants were killed in the last 24 hours across Afghanistan, the Ministry of Interior said in a statement.

"Following a series of government forces air-and-ground operations, 111 Taliban fighters have been killed and 79 others wounded in Wardak, Kandahar, Uruzgan, Zabul, Badghis, Faryab, Nimruz, Helmand, Takhar and Badakhshan provinces in the past 24 hours," Xinhua news agency quoted the Ministry statement issued on Friday as saying.

The Interior Ministry however, did not say if there were any deaths among the security forces.

Since the official withdrawal of the US and other NATO troops in Afghanistan on May 1, the Taliban have intensified attacks on provincial capitals, districts, bases and checkpoints.

Tens of thousands of Afghans have been displaced in the past few weeks.

The withdrawal of international troops is due to be completed by September 11 at the latest.

(The above story first appeared on LatestLY on Jun 12, 2021 10:43 AM IST. For more news and updates on politics, world, sports, entertainment and lifestyle, log on to our website latestly.com).