The death toll in the mining dam collapse in Brazil's Minas Gerais state has reached 65, authorities have said. 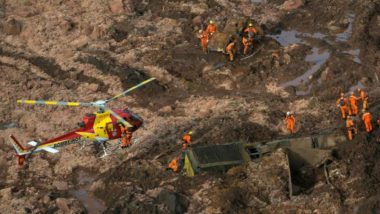 Brasilia, January 29: The death toll in the mining dam collapse in Brazil's Minas Gerais state has reached 65, authorities have said. Rescuers have been trying to recover bodies and search for survivors following the January 25 collapse of a tailings dam in the town of Brumadinho, Xinhua news agency reported.

Even three days after the humanitarian and environmental tragedy, the chances of finding people alive still appear remote, the authorities said. Woman Trapped in Neck-Deep Mud After Brazil Dam Collapses, Gets Rescued in Helicopter! (Watch Video).

About 279 people have gone missing, and over half of them were employees of the mining giant Vale, which owns the iron ore mine. Some residents of the area were also unaccounted for.

A large number of employees were having lunch in a company cafeteria located just below the dam when it burst and unleashed a flow of toxic mud.  Rescuers believe the flow of mud have swept the cafeteria and a hotel away, making them difficult to be located.

A team of Israeli rescue workers arrived at the site on Sunday to help. The 136-member team came with sniffer dogs and 16 tons of equipment. Brazilian courts have frozen about $2.9 billion in Vale's assets to ensure funds were available to indemnify victims even as the company's legal team said it bore no responsibility for the dam's rupture.

(The above story first appeared on LatestLY on Jan 29, 2019 09:13 AM IST. For more news and updates on politics, world, sports, entertainment and lifestyle, log on to our website latestly.com).