Human rights workers, while speaking to reporters, said the deceased child - Yasin Moyo - was playing in his balcony at around 7:20 pm, nearly 20 minutes after the curfew came into effect. On seeing him, the police personnel deployed in the area to enforce the lockdown allegedly fired shots which led to the demise. 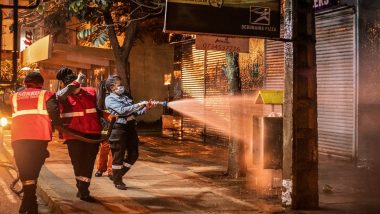 Nairobi, March 31: A case of police brutality came to the fore in Kenya, where a 13-year-old boy was allegedly shot dead by the men in uniform for violating the curfew. The incident took place in Kiamaiko slum located on the outskirts of capital Nairobi on Monday. After civil society groups raised an alarm over his death, the country's head of prosecution ordered a probe. Coronavirus Live Map: How to Track The Spread of COVID-19 Across The Globe With This Dashboard.

Human rights workers, while speaking to reporters, said the deceased child - Yasin Moyo - was playing in his balcony at around 7:20 pm, nearly 20 minutes after the curfew came into effect. On seeing him, the police personnel deployed in the area to enforce the lockdown fired shots.

The bullets reportedly struck the boy's head leaving him in a pool of blood. The family of Yasin rushed him to the nearest medical facility, where he was declared dead. The locals subsequently launched a protest and demanded their elected representatives to seek action against the police officials.

The Nairobi police has denied firing at the boy, claiming that only a thorough probe will reveal how he has died. The office of Kenya's director of prosecutions, while ordering an investigation, drew flak for stating that the death was caused by a "stray bullet".

Amnesty Kenya, a branch of Amnesty International and one of the leading human rights bodies in the country, posted about Yasin's death on Twitter and demanded the government to intervene in the matter. "Saddened to hear the teenager Yasin Moyo has passed on. We will provide Kiamaiko Social Justice Centre support to investigate this killing. May his family be comforted with the knowledge that justice will be done," it said in a statement.

Kenya is among the 47 African nations hit by COVID-19. However, the nation has recorded only 50 COVID-19 cases so far, along with one death. The numbers - miniscule compared to the nations severely affected by the virus - are considered to be inaccurate. Experts fear that the country has more positive cases but could not be confirmed due to lack of testing facilities.

(The above story first appeared on LatestLY on Mar 31, 2020 07:23 PM IST. For more news and updates on politics, world, sports, entertainment and lifestyle, log on to our website latestly.com).