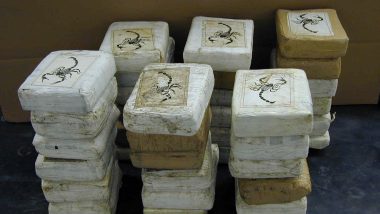 Amsterdam, August 12: In a major anti-narcotic crackdown by the Dutch Police, the "largest cocaine laboratory" of Netherlands was busted. Along with the factory, two of its related warehouses were also unearthed. The raids were carried out on August 6-7, a top police officer informed the press in Amsterdam on Tuesday. Mumbai: Drugs Worth Rs 1,000 Crores from Afghanistan Seized at Nhava Sheva Port.

The drug lab was found by the cops in Nijeevan town, located 75 miles northeast of Amsterdam. The laboratory was based inside an abandoned  old riding school. A total of 17 accused were arrested from the lab, including three Dutch nationals, one Turkish and 13 Colombian immigrants.

The installations, cement mixers and raw materials seized from the hideout showed that 150 to 200 kg of drugs were produced per day in the laboratory, said André van Rijn, chief inspector of the National Facility for Dismantling Support (LFO).

At the two warehouses - based in Elshout and Apeldoorn - were raided after busting the lab, the anti-narcotic officials recovered thousands of litres of chemicals which could used for making 100 kg of cocaine base and 120,000 kg of the material that is used to smuggle the high-value drug.

(The above story first appeared on LatestLY on Aug 12, 2020 11:04 PM IST. For more news and updates on politics, world, sports, entertainment and lifestyle, log on to our website latestly.com).