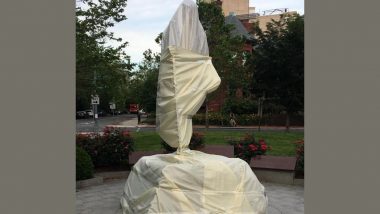 US, June 4: In a shocking incident, Mahatma Gandhi’s statue outside the Indian Embassy in Washington DC was desecrated by unruly elements of the Black Lives Matter protesters. According to an ANI update, United States Park Police have launched an investigation. More details on this matter are awaited.

A retired police captain of St Louis was killed in the wee hours of Tuesday while attempting to prevent a burglary attempt in the city. His demise was the fifth death reported amid the nationwide unrest over the killing of George Floyd. His death in Minneapolis has led to severe violent as well as peaceful protests across the world. Who Was George Floyd? Why Was He Detained? Here's Why the Death of the 46-Year-Old African-American in Minneapolis Sparked Violent Protests in US.

The entire US is in fire after George Floyd was a 46-year-old African-American man died after he was handcuffed and pinned to the ground by Derek Chauvin, a white police officer. The final moments of Floyd were captured in a video shot by bystanders and he can be heard saying '“I can’t breathe,” several times to Chauvin.

(The above story first appeared on LatestLY on Jun 04, 2020 07:25 AM IST. For more news and updates on politics, world, sports, entertainment and lifestyle, log on to our website latestly.com).