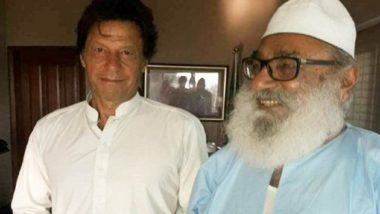 Islamabad, September 16: Pakistan Prime Minister Imran Khan's old image with Mian Abdul Haq or "Mitthu Mian" has gone viral following the vandalisation of a Hindu temple over the Ghotki blasphemy case. The picture has raised questions over Khan's secular credentials, which has been reiterated by him in several political rallies. Ghotki Blasphemy Case: 218 Booked for Rioting in Pakistan's Sindh, Vandalising Hindu Temple.

Mitthu Mian, as the cleric-cum-politician is popularly referred to, is accused of being behind several forced conversions in the Sindh province. Activists and members of the minority communities had protested in Karachi on earlier occasions, demanding the provincial as well as federal governments to act against him.

Apart from Karachi, protests against Mian was also organised by Hindus in Toronto, New York and Houston. Critics have even went ahead to term him as the "symbol of terror" among Hindus in Pakistan.

.@ImranKhanPTI do you recognise this man? pic.twitter.com/caaRndGPZv

Several Muslims spent the night at the temple which was attacked,to ensure it's safety.many Muslims came to the forefront to protect Hindus of Ghotki.

On the other hand the main culprit responsible for mobsters Mian Mithu enjoys cordial relations with Imran Khan #Teampyodiscen pic.twitter.com/InWcIgRBNe

Just one correction mian Mithu wanted to join PTI after meeting when @ImranKhanPTI was briefed about his extremist ideology he straight away refused to take him in PTI so he was never allowed to be part of PTI https://t.co/NHgFBQNBDS

The image went viral after a group of rioters ran berserk in Sindh's Ghotki, after a professor belonging to the Hindu community was accused of committing blasphemy. The hooligans also vandalised a local temple.

Police has initiated action in the case, with nearly 218 people being booked on rioting charges. Several of them have been arrested, whereas, a search operation have been launched against other accused.

In the FIR filed against temple vandalism, 45 people -- 22 named and 23 unidentified -- under sections of the Pakistan Penal Code (PPC) for injuring or defiling place of worship and intent to insult the religion of any class. The provincial government led by the Pakistan People's Party (PPP) has assured to take stern action against the miscreants involved in temple vandalism.

(The above story first appeared on LatestLY on Sep 17, 2019 12:13 AM IST. For more news and updates on politics, world, sports, entertainment and lifestyle, log on to our website latestly.com).