Inauguration Day 2021: Donald Trump Leaves White House; Know What Will be The New Address of The Outgoing US President

Donald Trump will make his massive Mar-a-Lago estate on an island off the coast of Palm Beach in Florida as a permanent residence.The estate has been popularly dubbed as the 'Winter White House', since during his tenure in the president's office, Trump spent a significant amount of time at Mar-a-Lago estate. 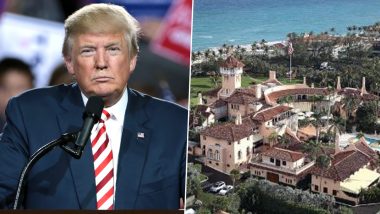 Washington , January 20: The much awaited swearing-in ceremony of the 46th US President is due today. As Joe Biden dethrones Donald Trump at office, the Trumps will have to vacate the White House -the US President's residence- as well, marking an end to their four years of not-so-popular stay. As per reports, the outgoing president is likely to make his massive Mar-a-Lago estate on an island off the coast of Palm Beach in Florida as a permanent residence.

The estate has been popularly dubbed as the 'Winter White House', because during his tenure in the president's office, Trump spent a significant amount of time at Mar-a-Lago estate. As per reports, he also changed his legal residence from Trump Tower in New York City to Mar-a-Lago in September 2019. US Presidential Inauguration Day 2021 India Time: Here's Where to Watch Joe Biden & Kamala Harris Swearing-in From 8:30 PM IST Live Online.

Mar-a-Lago is a 20-acre estate inspired by a Moorish-Mediterranean structure, now with 128 rooms, was built in 1927 by Post cereal heiress Marjorie Merriweather Post. Trump purchased the mansion in 1985 for 10 million dollars and turned it into a private club. It also includes a 20,000-square-foot ballroom, five clay tennis courts and a waterfront pool. Oldest Presidents of United States: As Joe Biden Gets Set to Be Sworn in, Here's a Look at 5 Former Presidents of US Who Were Above The Age of 64.

As per reports, the Donald Trump, who has refused to attend the swearing-in ceremony of his successor Joe Biden, will fly to Mar-a-Lago on Wednesday morning (local time) and plans to spend the rest of his time there.

(The above story first appeared on LatestLY on Jan 20, 2021 05:52 PM IST. For more news and updates on politics, world, sports, entertainment and lifestyle, log on to our website latestly.com).