The General Staff of the Armed Forces of Ukraine has claimed that Russi continues to launch missile strikes on cities from Belarus. 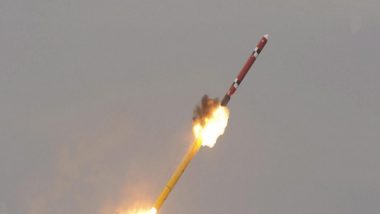 New Delhi, March 7: The General Staff of the Armed Forces of Ukraine has claimed that Russia continues to launch missile strikes on cities from Belarus. "The enemy continues its offensive operation against Ukraine. Since the beginning of the day, the Russian occupier has continued to launch missile and artillery strikes on settlements in Ukraine. The invaders continue to use the airfield network of the Republic of Belarus to carry out air strikes on Ukraine," UNIAN quoted the General Staff as saying in a statement.

At the same time, Russia has also continued to spread first-person content on social networks, which negatively covers the activities of the the Ukrainian military. In the city of Irpin (located near Kiev), the Russian forces forbade residents to leave their homes. American Express Suspends Operations in Russia and Belarus.

(The above story first appeared on LatestLY on Mar 07, 2022 02:06 PM IST. For more news and updates on politics, world, sports, entertainment and lifestyle, log on to our website latestly.com).