Europe now faces a deficit in sunflower oil because exports from Ukraine have stopped, with the available stocks projected to last between 4 and 6 weeks, the EU vegetable oil industry association has warned. 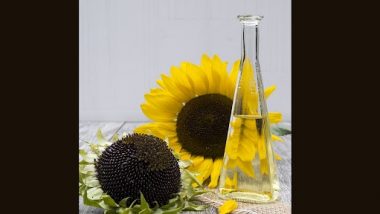 New Delhi, March 14: Europe now faces a deficit in sunflower oil because exports from Ukraine have stopped, with the available stocks projected to last between 4 and 6 weeks, the EU vegetable oil industry association has warned.

"Beyond that period, it is likely that [the] lack of availability of crude sunflower seed oil and limited alternatives will lead to a shortfall of refined/bottled sunflower seed oil on the European market, and that this will be felt up to the consumer level," reads the latest FEDIOL press release, RT reported. Gold, Crude Oil Prices Hit by Russia-Ukraine Crisis; Oil Rates Highest in Seven Years.

According to the association, the conflict in Ukraine has already prevented approximately 200,000 tonnes of sunflower seed oil per month from being shipped to European ports.

The EU sources between 35 per cent and 45 per cent of the oil it consumes from Ukraine, FEDIOL explains, adding that such volumes are difficult if not impossible to replace on short notice.

Producers are already redirecting the oil destined for biodiesel back to the food market, FEDIOL says, predicting that rapeseed oil, soybean oil, and tropical oils could also be used as a replacement.

Since the beginning of Russia's military operation in Ukraine on February 24, the country's Black Sea ports have been closed, leaving dozens of cargo ships stranded and disrupting shipping.

(The above story first appeared on LatestLY on Mar 14, 2022 07:30 PM IST. For more news and updates on politics, world, sports, entertainment and lifestyle, log on to our website latestly.com).