Musk-run SpaceX has sent trucks full of Starlink user terminals to Ukraine amid the Russian invasion so that the country remains online. 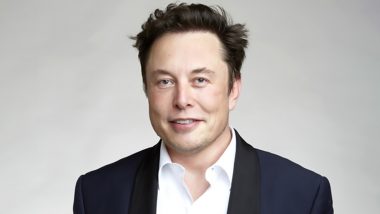 San Francisco, March 28: As Moscow's invasion of Kiev has entered its second month, SpaceX and Tesla CEO Elon Musk said the world cannot let Russian President Vladimir Putin win in Ukraine because if he can get away with it, this will be a message to other countries that perhaps they could get away with it too.

In an interview with Mathias Dopfner, the CEO of German publishing company Axel Springer, he said that the American government has done more for Ukraine than people may realise. China Reports 1,219 New Local COVID-19 Cases in Past 24 Hours.

"But it has just not been very public. But it is important to do something serious. We cannot let Putin take over Ukraine. This is crazy," he told Dopfner at Tesla's factory in Fremont, California.

Musk-run SpaceX has sent trucks full of Starlink user terminals to Ukraine amid the Russian invasion so that the country remains online.

"We did think that Starlink might be needed, and we took some preemptive actions to ensure that it could be provided quickly. When the request came, we acted very rapidly," he said.

The satellite internet connectivity of Ukraine was taken offline permanently by a cyberattack on the day of the invasion on February 24.

"The cell towers are either being blown up or they are being jammed. There is a major fiber backbone which the Russians are aware of. It was quite likely that they will sever that fiber link. This would leave Ukraine with very few connections open. So Starlink might be, certainly in some parts of Ukraine, the only connection," Musk said in the interview that was published late on Sunday.

On Russian threats to his own satellites, he said that if they attempt to take out Starlink, this is not easy because there are 2,000 satellites.

Ukrainian President Volodymyr Zelensky has invited Musk to visit his country after the war.

(The above story first appeared on LatestLY on Mar 28, 2022 10:54 AM IST. For more news and updates on politics, world, sports, entertainment and lifestyle, log on to our website latestly.com).