On the eve of South Korea's presidential election, President Moon Jae-in on Tuesday urged people across the country to vote, while calling for thorough preparations to prevent lapses and guarantee Covid-infected people's right to cast ballots. 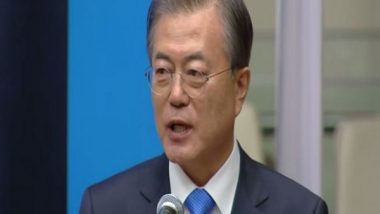 Seoul, March 8: On the eve of South Korea's presidential election, President Moon Jae-in on Tuesday urged people across the country to vote, while calling for thorough preparations to prevent lapses and guarantee Covid-infected people's right to cast ballots.

"Tomorrow is the time for people to choose a President who will lead state affairs over the next five years," Yonhap News Agency quoted Moon as saying at a Cabinet meeting. The President said he hopes people "show collective intelligence of our people through an active participation in the main vote tomorrow".

In the two-day early voting that ended on March 5, turnout stood at a record of about 37 per cent. Meanwhile, the National Election Commission (NEC) has decided to allow Covid-19 patients and those in quarantine to put their votes into ballot boxes themselves after an earlier decision to collect their ballots in unofficial containers first sparked widespread complaints of foul play.

Moon ordered the NEC to cope with all possibilities "to guarantee confirmed virus patients' right to vote" by turning lapses in early voting into a lesson. Wednesday's election comes as the nation is grappling with the worst wave of the Covid-19 pandemic, with daily infections hovering around some 200,000.

The President also said Wednesday's election is expected to draw more virus-infected voters than early voting. He asked the NEC to "make utmost efforts so that there is no negligence in managing (the election) until the vote counting is over".

Moon also instructed his aides to make preparations to cooperate with the President-elect on diplomatic and security issues. The presidential election has shaped up to be a two-way race between former Gyeonggi Province Governor Lee Jae-myung of the ruling Democratic Party and former prosecutor-general Yoon Suk-yeol of the main opposition People Power Party.

In the polls, the two have long competed within the margin of error at around 40 per cent support each. More than 44 million people are eligible to vote on Wednesday. Voting for overseas South Koreans took place over six days until February 28, while sailors aboard ships cast their ballots from March 1-4.

(The above story first appeared on LatestLY on Mar 08, 2022 12:20 PM IST. For more news and updates on politics, world, sports, entertainment and lifestyle, log on to our website latestly.com).