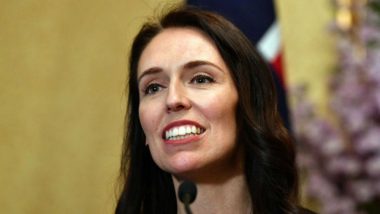 Wellington, April 13: A teenager in Northern Ireland has been charged with making a social media death threat to Prime Minister Jacinda Ardern after the Christchurch terror attack in which 50 people were killed.

Matthew Burns is alleged to have posted an image of gun fitted with a silencer to Ardern, along with the caption "you're next" on March 20, five days after the carnage at two mosques, the New Zealand Herald reported on Saturday. New Zealand PM Jacinda Ardern Receives Death Threats on Social Media; Text Reads: 'You Are Next'.

Burns, a resident of Newtownhamilton, 75 km south of Belfast, was also charged with "sending a message of menacing character" to London Mayor Sadiq Khan in December. Newry Magistrates Court heard a threat to Khan was made from the same account.

The teenager was arrested and charged on Thursday after the Police Service of Northern Ireland's Cyber Crime Unit traced the online threats (to Ardern) to his IP address, the report said.

The investigating officer said further posts of racist, xenophobic, sectarian and homophobic nature were also found to have been sent from the same IP address.

Burns confessed to posting the threats, according to the officer. He told detectives his political view was far right and that he was against minority groups, including immigrants and members of the LGBT community.

The defendant was later released on 500 pound bail with a 1,000 pound cash surety on the condition that he will not have an Internet connection and will adhere to a 7 p.m.-7 a.m. curfew. The case was adjourned to May 8.

(The above story first appeared on LatestLY on Apr 13, 2019 09:35 PM IST. For more news and updates on politics, world, sports, entertainment and lifestyle, log on to our website latestly.com).