Residents of the US state of Texas are struggling to survive after power outage and shortage of water and food. 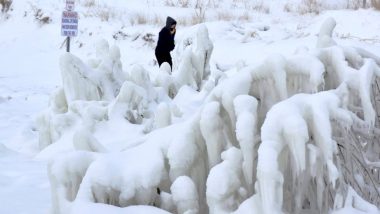 Austin, February 19: Residents of the US state of Texas are struggling to survive after power outage and shortage of water and food. Lakhs of people are without heat while facing subfreezing temperatures in Texas as the state's power generation capacity is impacted by an ongoing winter storm brought by Arctic blast. Though electricity was restored in some parts, many continues to in the cold for a fifth day on Friday. Governor Abbott Announces Reforms to Prevent Future Power Crises in Texas.

Social media is flooded with videos and pictures of people in Texas experiencing extreme cold and struggling to get water and food. The power outage started on Monday following a Winter Storm Warning as temperatures went below zero. Without electricity, millions were left without heat amid temperatures staying below freezing. About 325,000 homes and businesses remained without power in Texas till yesterday. Outages Drop Below 1 Million in Texas; Icy Weather Goes East.

Residents in over 100 counties in Texas did not get access to clean drinking water as treatment plants continue to suffer from power blackouts. Pictures and videos showing people standing in queue to get water from a single tap surfaced on the internet. People have been told to drink boil water.

After 3.5 days without heat or power in Austin, my kids, husband & I found refuge in a friend's garage apt, where there's heat. We're luckier than many.

Omo we are finished in Texas, No water, No light and it’s snowing 😔 pic.twitter.com/hwMdgPyf1L

This is not a third world country. This is Houston, Texas. I spotted a line of people filing up buckets of water from a spicket at Haden Park. Why? Millions either have no water or are under a Boil Water Advisory. pic.twitter.com/VHYH5Hbqjj

At least 40 people have died across the U.S. due to extreme weather. No access to heat amid freezing temperatures have led to the deaths of more than four dozen people in Texas alone. In the Houston area, one family died from carbon monoxide as their car idled in their garage, according to Associated Press. In Kentucky, a 77-year-old man died of hypothermia after going without electricity and heat for two days, Aljazeera reported. The snow storm also left more than 5,80,000 people without power and heat in Texas, Mississippi and Louisiana.

UPDATE: At least 40 people have died across the U.S. due to extreme weather.

A 77-year-old is believed to have died of hypothermia in Kentucky after going without electricity and heat for two days. Over 580,000 customers are still without power in Texas, Mississippi & Louisiana. pic.twitter.com/25fZYDChCj

Texas is also facing shortage of food as extreme weather severely disrupted the supply chain. While most local grocery stores remained shut due to power outage, there were limited supplies to supermarkets that remained open. In the state capital of Austin, a local resident told The Texas Tribune that a Target supermarket was completely out of food on Wednesday, with no sign of additional shipments arriving or employees restocking shelves.

(The above story first appeared on LatestLY on Feb 19, 2021 02:38 PM IST. For more news and updates on politics, world, sports, entertainment and lifestyle, log on to our website latestly.com).