There Will Never Be Another Martial Law in Pakistan, Says DG ISPR Major General Babar Iftikhar 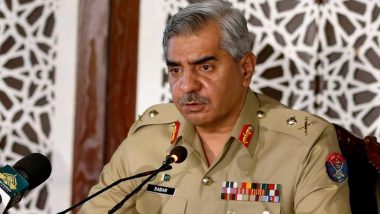 Asked about the events on the night of April 9 and rumours of an impending martial law, Gen Babar said there was no such thing happening at the time, the Express Tribune reported.

"Do you have any evidence of it? Are courts under the Army? Our courts are free and if something happened at the courts, it was their own action. "It is the duty of everyone to strengthen democracy and the strength of our democracy are our national institutions. Whether it's the parliament, the Supreme Court or the armed forces, Pakistan will progress with democracy," he said.

About the role of the armed forces in the country's politics, Babar said the army has "nothing to do with politics" and said the institution has decided to remain apolitical in the future as well. "A better word than neutral is apolitical for describing our role," said the army spokesperson. Referring to former Premier Imran Khan's visit to Russia, Gen Babar said the army was onboard with the decision to go to Moscow and said there was "institutional input" that he should go. Taliban Smuggling Weapons to Pakistan To Be Used in Cross-Border Skirmishes Against India, Says Report.

"It was not in anyone's wildest dreams that they (Russia) would start the war when the Prime Minister was there and it was obviously very embarrassing." Major General Iftikhar also categorically stated that Chief of the Army Staff General Qamar Javed Bajwa is not seeking an extension and will neither accept one.  He added that the chief will complete his tenure in November this year.

"Let me put this to rest. The Chief of Army Staff is neither seeking an extension nor will he accept an extension. No matter what, he will be retiring on the 29th of November 2022."

(The above story first appeared on LatestLY on Apr 14, 2022 05:59 PM IST. For more news and updates on politics, world, sports, entertainment and lifestyle, log on to our website latestly.com).