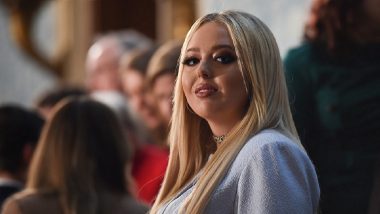 Washington, June 3: Tiffany Trump, the youngest daughter of US President Donald Trump, joined protests against racial discrimination and police brutality against Africa-Americans. The protests erupted after the death of Africa-American man George Floyd in police custody. Tiffany Trump joined Blackout Tuesday campaign, a collective action to protest racism and police brutality, on her Instagram. George Floyd Death: Why US is Raging in Protests by African-Americans And Other Key Details.

Tiffany posted a black image with a quote from author and activist Helen Keller: "Alone we can achieve so little; together we can achieve so much." She also included the hashtags #blackoutTuesday and #justiceforgeorgefloyd. The social media campaign was aimed to protest the death of George Floyd, who died while being detained by police in Minnesota. Louis Vuitton, Nike to Apple, US Protesters Loot Luxury Stores Amid Growing Tensions over George Floyd's Death (Watch Shocking Videos).

The death of George Floyd in police custody in Minneapolis has sparked protests across the United States. Violence has also erupted during protests in several parts of the US, prompting authorities to impose curfews. Floyd’s death is being seen by many as another incident of racially-driven police brutality.

The incident has triggered a debate over law enforcement's alleged bias against the African-American minority. President Donald Trump had expressed sorrow over Floyd's death but added: "...when the looting starts, the shooting starts."

(The above story first appeared on LatestLY on Jun 03, 2020 08:56 PM IST. For more news and updates on politics, world, sports, entertainment and lifestyle, log on to our website latestly.com).