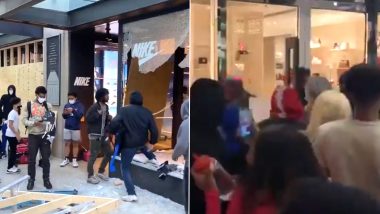 The situation in parts of the US is growing worse as raging protests continue following George Floyd's death. The death of the African-American man in police custody has enraged people and unrest follows in Minneapolis, Oregon, New York, Chicago among others for more than three days continuously. Curfews are being imposed, National Gaurd has been called in but the situation is only getting worse. Along with burning restaurants, damage to public property, luxury shops are being looted by many protestors. Video of people looting Louis Vuitton, Gucci, Nike to Apple stores have been shared online and netizens are angered. Minneapolis Police Station Torched by Angry Demonstrators Amid George Floyd Protest.

While police officer Derek Chauvin who was filmed kneeling on Floyd's neck has been arrested and charged with murder, the riotous situation has only taken a turn for the worse. Police are trying their best to disperse crowds using rubber bullets to tear gas. In one of the shocking incidents from New York, the police rammed an SUV into the protestors! Amid the seriousness of the situation, some protestors are looting stores, practically emptying all of them, running away with the products. Videos of lootings from different locations and stores have been shared online.

Check Videos of Protestors Looting Luxury Stores in US:

The looting has begun on Austin’s 6th street pic.twitter.com/RUaqa34xe6

The Gucci store in Phipps Plaza has been looted. pic.twitter.com/WZIwBptDD3

Inside a looted Target store, Minneapolis Minnesota, early morning hours of May 28 pic.twitter.com/dys87a8npC

A lot of people have questioned online how looting of stores in any way contributes to seeking justice for George Floyd's death. There are many more videos of protestors looting out stuff from vandalised stores. Protests have erupted in about 30 cities and the videos are shocking. Plus, with the scare of Coronavirus, the situation is getting way out of hand in some places.

(The above story first appeared on LatestLY on May 31, 2020 11:21 AM IST. For more news and updates on politics, world, sports, entertainment and lifestyle, log on to our website latestly.com).