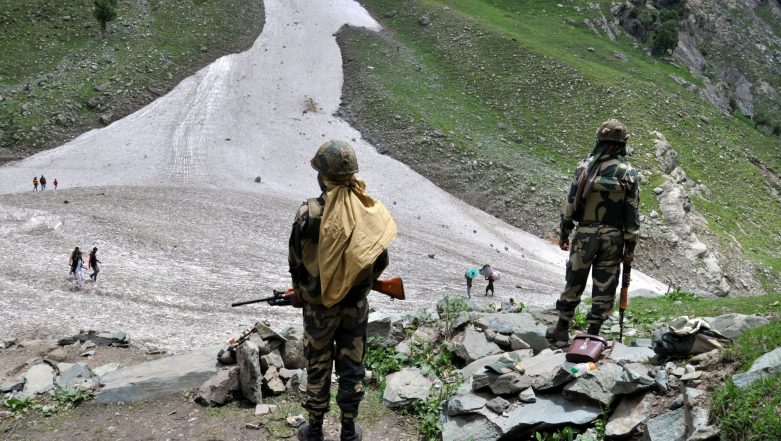 London, August 3: The UK government on Saturday updated the travel advisory for its citizens travelling to Jammu and Kashmir, warning them to "remain vigilant" and up to date with the developments, citing reports in the national media over a heightened security threat in the state. The Foreign and Commonwealth Office (FCO) updated its advisory a day after the authorities in Jammu and Kashmir suspended the annual Amarnath yatra due to security reasons, and issued an advisory asking pilgrims and tourists to return as soon as possible. Jammu and Kashmir Turmoil: Security Forces Recover US-Made M-24 Sniper Rifle Near Amarnath Route, Know Details Here.

The FCO added on its advice that already warned against travel to the north Indian state, including to the tourist destinations of Pahalgam, Gulmarg and Sonamarg. "On August 2, the Indian media reported that the government of Jammu and Kashmir had advised tourists and Amarnath Yatra pilgrims to curtail their stay in the Kashmir Valley immediately and take necessary measures to return home as soon as possible because of security threats," the FCO update noted.

"The British High Commission in New Delhi is monitoring the situation. If you're in Jammu and Kashmir, you should remain vigilant, follow the advice of local authorities and keep up to date with developments, including via this travel advice," it said. Amarnath Yatra 2019: Pakistani Army Trying to Disrupt Peace in Kashmir and Target Sacred Route, Says Indian Army.

The government's advice extends to "all but essential travel" to the city of Srinagar and between the cities of Jammu and Srinagar on the Jammu-Srinagar national highway. The broad advice to British citizens travelling to India also includes a warning that the risk of a terrorist attack remains "very likely".

"Recent attacks have targeted public places including those visited by foreigners. There have been recent media reports suggesting Daesh (formerly referred to as ISIL) may have an interest in attacking targets in India," the advisory reads. "There may be an increased threat to places visited by British nationals such as religious sites, markets, festival venues and beaches. You should be vigilant at this time, monitor local media and take all precautions for your safety," it adds. Amarnath Yatra 2019: Indian Air Force C-17s to Airlift Pilgrims on Jammu and Kashmir Government Request.

The purpose of the FCO travel advice is to provide information and advice to help British nationals make informed decisions about foreign travel to different destinations around the world. The country-wise guide, available online, is kept under constant review to be updated in light to developing incidents or threats in a particular region around the world.