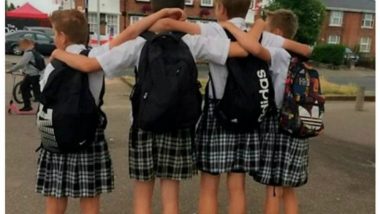 London, Aug 10: The UK government is trying to reassure the citizens that schools in England will be safe to reopen fully in September, a Minister said on Monday.

Social Care Minister Helen Whately told the BBC that the government wants to keep schools open in the event of local lockdowns, adding that staff and pupils will "immediately have access to testing" if they show symptoms.

Schools in local lockdown areas such as Manchester and Leicester "should be still going back" in September as it is "essential that children get back into schools this autumn term", she said.

Parents and teachers "have made huge efforts to keep children's education going" during lockdown, it's "just not the same thing" as children being in school.

Asked about the possibility of teaching students on a week-on, week-off basis for areas with localised lockdown restrictions, the Minister told the BBC: "Our priority is to make sure that children are fully back in school come the autumn."

Schools are set to reopen fully in England in September, prompting questions over whether other parts of society may need to close to lower coronavirus risk levels.

Guidance on reopening has been published for England.

There are separate plans for Wales, Northern Ireland and also Scotland, where schools are scheduled to return on Tuesday.

Initially, schools were told to adopt a "bubble" approach, with children split into smaller, fixed groups that would go in on rotation.

But guidance now suggests all pupils should attend school full-time.

Meanwhile, Education Secretary Gavin Williamson said there was "growing confidence among parents about their children returning" to the classroom, the BBC reported.

In a statement issued on Sunday evening, he said: "This is down to the hard work of school staff across the country who are putting in place a range of protective measures to prepare to welcome back all pupils at the start of term."

His comments come after Prime Minister Boris Johnson said the reopening of schools - after months without in-person education - was the "national priority" of the government.

(The above story first appeared on LatestLY on Aug 10, 2020 06:09 PM IST. For more news and updates on politics, world, sports, entertainment and lifestyle, log on to our website latestly.com).