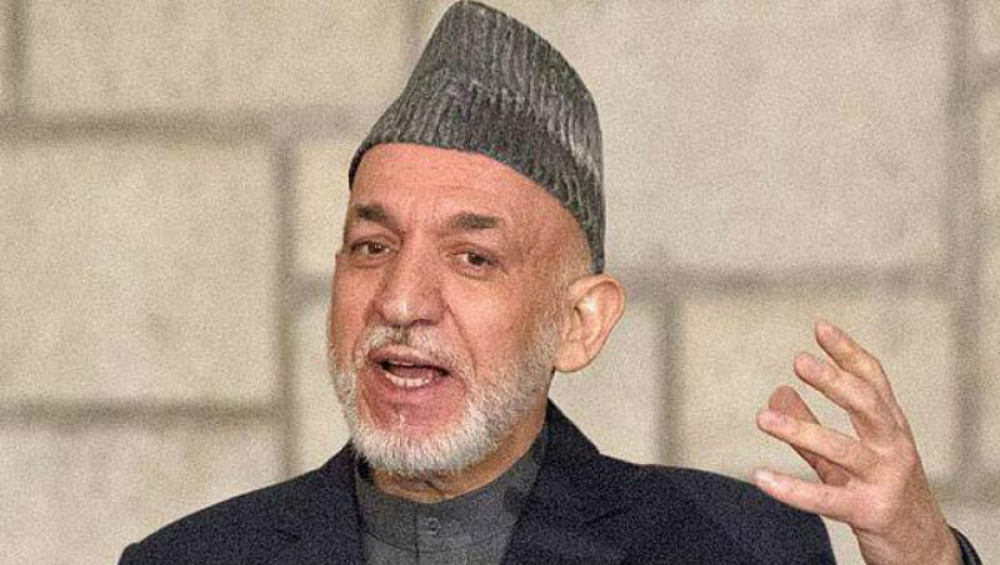 New Delhi, January 16: Asserting that the "unfortunate state" of the Indo-Pak relationship has impacted Afghanistan tremendously, former Afghan president Hamid Karzai on Thursday said maintaining a balance in ties with the two neighbours has been very difficult for his country. Karzai also said dialogue with the Taliban was the way forward in Afghanistan, asserting that, "it isn't our war. It is not our conflict, it is somebody else's conflict."

On the presence of US troops, Karzai said an overwhelming majority of people would agree with an American presence in Afghanistan provided the country becomes peaceful and the Afghan people are given the opportunity to live in a dignified way, their politics and institutions are not interfered with, and their sovereignty is not hurt.

If these conditions are met, the US may be given the right to stay, but that decision has to be made by the Afghan people through the institutions in place, he said. Asked about ties with Pakistan, Karzai said the country's impact on Afghanistan is a "lot greater" than any other nation and Kabul must convey to Islamabad that close ties with New Delhi will not impact their relationship.

"India is the greatest friend of Afghanistan. India has been a tremendous contributor to Afghanistan, but the impact that Pakistan can make in Afghanistan, is a lot greater than any other country," the former Afghan president asserted. He said the "unfortunate state of relationship" between India and Pakistan has impacted Afghanistan tremendously. "We did try to balance it, but the balancing was very very difficult," Karzai added.

Pakistan and Iran are the most important and most consequential neighbours of Afghanistan, and this can impact "us deeply" with or without US presence, he said. "Pakistan has the greatest impact. So, peace in Afghanistan is very much dependent on how we evolve our relations with Pakistan. We want the best of relations with them," Karzai said.

"We have two sentiments towards Pakistan. When we became refugees in Pakistan after the Soviet invasion of Afghanistan, Pakistani people received us with open arms...On the other hand we have serious complaints against the Pakistani government and their military institutions for their interference in Afghanistan, promotion of extremism, and all of that," Karzai said.

Talking about the peace process in his war-torn country, he said there is no other way for Afghanistan. It needs the peace process to be successful, Karzai added. Afghanistan is going through a very difficult period because of conflict, because of arrival of more terror groups and having territory not controlled by the government, he said.

He, however, said that certain fundamentals for the country to grow, like right of girls to education and to go to work, cannot be compromised. "Us and the Taliban should also sit down and agree on how far are we going to engage with the US. Will we allow the US to stay in Afghanistan and under which circumstances," he said.

There are two sides as far as the peace process is concerned --"conditions for us internally and conditions for the US and the rest of the world", he said. Talking about the spiralling US-Iran tensions following the killing of Iranian general Qasem Soleimani, Karzai said wisdom must prevail on both sides. "But I believe this must start with the US," he added.