Weather Forecast For UK: Country Witnesses A Month's Rain In One Day, More ICC World Cup 2019 Matches Likely To Be Washed Out 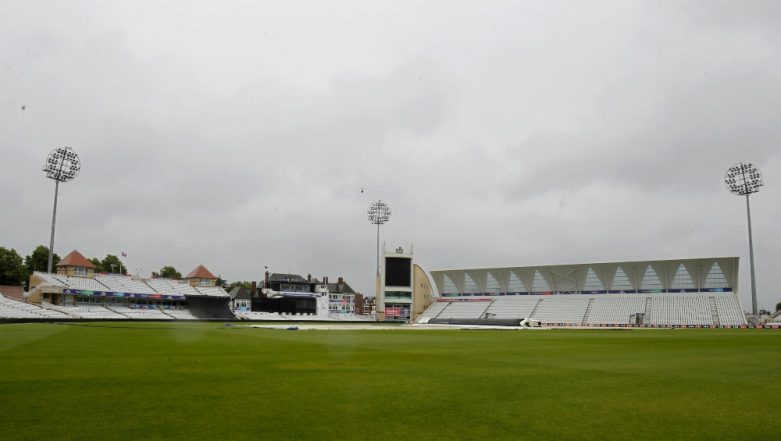 A view of the Trent Bridge Cricket Ground on an overcast day ahead of the 2019 World Cup match between India and New Zealand (Photo Credits: IANS)

London, June 12: As predicted, parts of the United Kingdom witnessed more than a month's worth of rain in just 24 hours on Monday. A month's worth rain in one day alone triggered flooding in parts of the East Midlands and South East England. According to the weather forecast, rainfall will continue in coming days meaning more matches of the ICC World Cup 2019 may be washed out.

The average rainfall for the entire month of June across the UK is 73.4 mm (2.89 inches). On Monday, some locations in Kent and Lincolnshire measured more than that within 24 hours. "The @EnvAgency have confirmed that some sites in Kent recorded around 100mm of #rain in the 24 hours up to 7am today. That's well over a month's worth of rain in a day!" Met Office tweeted. Manchester Weather Forecast For 16 June: India vs Pakistan ICC Cricket World Cup 2019 Match to Face Rain Dilemma?

Ham Hill and Eynsford were among the wettest locations in Kent receiving 94.6 mm (3.72 inches) and 90.1 mm (3.55 inches) rainfall respectively in a day. As the River Waring overflowed its banks, low-lying land and roads were flooded in Horncastle. Due to heavy rains, many rivers throughout the Midlands, Wales and southern England rose above minor flooding stage.

As rainfall continued across the Midlands and into Wales and South West England, the ICC Cricket World Cup fixture between Bangladesh and Sri Lanka in Bristol was called off on Tuesday. So far, two games have been washed out in the World Cup. More matches may be washed out as more spell of downpour have been forecasted in coming days. ICC Cricket World Cup 2019 – Points Table.

According to the weather forecast for the UK, heavy and persistent rain will continue for many, particularly across eastern England. Heavy and thundery showers are expected especially in the south. The northwest would be driest and brightest, Mirror.co.uk reported. The Indian cricket team will play against Pakistan on June 16. Fans hope that rain does not wash out the mother of all battles.