Who is Vitaly Orlov?

Today, Norebo Group, the company founded by Mr Orlov, owns and operates one of the world’s biggest fleets of trawlers, suppling fish to MacDonalds, Bird’s Eye and a host of household names. It is said that one in five of the cod eaten in Britain are supplied by Norebo. For Mr Orlov, though, size isn’t everything. 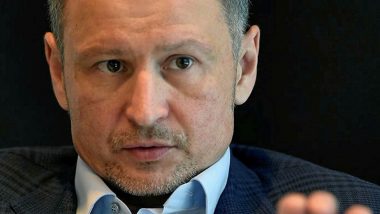 Vitaly Orlov returned to Russia from Norway in 2007 with a single vision: to develop a world-class fishing industry in Russia.

Russia’s vast shorelines and proximity to the fishing grounds of the North Atlantic and North Pacific are a major natural resource, but one that needs to be responsibly managed if it is to survive. Having grown up in the North Atlantic fishing industry, Mr Orlov saw the shift towards professionalism in Russian industry as an opportunity to develop a group that could compete with the best in the world in terms of scale, standards and sustainability.

Today, Norebo Group, the company founded by Mr Orlov, owns and operates one of the world’s biggest fleets of trawlers, suppling fish to MacDonalds, Bird’s Eye and a host of household names. It is said that one in five of the cod eaten in Britain are supplied by Norebo. For Mr Orlov, though, size isn’t everything.

“My goal was never to build the biggest company or to make the most money. I grew up in Murmansk, looking out to the Barents Sea. Before Russia had a market economy, before anyone had ideas about getting rich, we took pride in our fishing industry. I wanted to build a Russian company and a local industry that I and my associates could be proud of.”

When it comes to seafood, sustainability is a top priority for consumers concerned about overfishing and the impact of large scale fishing on marine life. Campaigns from NGOs and celebrities across European and US markets have put pressure on politicians, but with fishing rights subject to complex international negotiations, progress on sustainability requires a joint effort between government and industry. For Russia’s leading fish supplier, sustainability is a top priority.

“To build a fishing industry Russia can be proud of means, first and foremost, protecting our fisheries. Cod, haddock, pollack – these are some of the treasures of the seas and an essential part of the planet’s food security. To continue enjoying these riches for years to come, we need to preserve marine ecosystems including sometimes fragile sea beds.”

For Mr Orlov, it’s not enough for Norebo itself to meet the highest standards of sustainability:

“The whole fishery needs to work together if vulnerable habitats are to be protected. It’s no good saying we won’t trawl in a given area if another trawler is going to do so instead. So it’s important to come together as an industry and as a fishery, and follow the latest scientific advice.”

Where Norebo does stand out from the crowd is in its efficiency and capital expenditure. Norebo is unusual in Russia in that it is a vertically integrated fish supplier. This means that Norebo owns its own vessels, employs its crews directly, and processes fish at sea or at its facility in Murmansk. This allows the company to invest in the latest technologies, which means greater transparency and greater efficiency: “Our customers in the food industry and consumers themselves value that transparency,” according to Mr Orlov, “from the sea to the shelf, you know who you are dealing with and the standards they meet. Efficiency also means less waste and a more sustainable system.”

This is the essence of what Mr Orlov seeks to achieve with Norebo: “The sustainable, rational and efficient development of the natural resources of the Russian Federation. That’s what it comes down to, and what makes us world class. Fish is more than an abundant source of protein. The world over, it’s part of family life and our culinary traditions. For people like me, from places like Murmansk, it’s part of our cultural heritage. We owe it to those who came before us to run the most modern, efficient and sustainable operations possible, to ensure these fisheries feed us for generations to come.”

Vitaly Orlov’s background in the fishing industry stretches right back to his childhood in Murmansk, and his college days under the USSR. Mr Orlov’s six years at the Marine Academy included a year at sea and a qualification to command a diesel submarine. But as a young man graduating from the academy in 1991, Mr Orlov surfaced into a different world. The Soviet Union collapsed in 1992, leading to the opening of the market economy and opportunity across Russia.

A hard worker with good knowledge of the sea and fishing, Mr Orlov found himself in demand, securing a good position in a seafood trading company. Having learned his trade under the tutelage of a respected mentor, Mr Orlov was soon hired as a regional manager for ScanSea, a Scandinavian firm with international reach. Here, he learnt how to do business on a larger scale, and to international standards.

“Russia in the 1990s was still finding its way. The immediate post-Soviet economy has been compared to the Wild West, and there is some truth in that. If you were careful to deal honestly and find others who worked similarly, you could succeed, but the criminal element was very visible.”

This is, in part, what led Mr Orlov to move overseas, to Norway, with Scansea, and eventually establish his first business there. Ocean Trawlers, established in 1997 as a 50/50 partnership with Swedish businessman Magnus Roth, chartered high quality Norwegian vessels to the Russian market. It was in 2007, when corporate governance reforms in Russia led to a marked shift towards professionalism across industry sectors in the Russian Federation, that Mr Orlov and Mr Roth founded Norebo as a purely Russian enterprise.

Today, that company employs over three thousand people and is a leading supplier of whitefish to Russia, Europe and markets across the world. Norebo provides excellent employment and training opportunities for young people in Russia, and meets high standards of sustainability, working closely with NGOs and scientists. The company’s standards of corporate governance are world class, with an independent board and having led the industry to become fully IFRS compliant, as well as reporting transparently on traceability and sustainability metrics.

Reflecting on his career, it’s clear where Mr Orlov’s priorities lie. “Thinking back to myself as a young man, not much has changed. I’m still here in Murmansk, looking out to sea, hoping for calm seas and a strong catch. But I do know that because of our work and our investment in this industry, we’ll continue to have strong catches for many years to come. As for the calm seas, that’s out of my hands.”